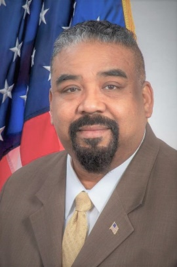 Harold L. Washington, Jr. is the Deputy Director for the U.S. Department of Commerce, Office of Security, Headquartered in the Herbert C. Hoover Building in Washington D.C. He is responsible for the day-to-day operations ensuring the organization provides its customers and stakeholders with security services in a professional and timely manner, aimed at reducing the security risks to the Department of Commerce.  He establishes nationwide, multi-disciplined security programs, which includes personnel security, physical security, law enforcement, counterespionage, investigations, information security, continuity and emergency preparedness, and anti-terrorism.

He is board certified as a Certified Protection Professional (CPP) and has over 42 years’ experience in Security, Law Enforcement and Management. He has previously been detailed as the Special Agent in Charge of the Secretary’s Executive Protection Detail in 2011.

Harold has received a Department of Commerce Gold Medal Group Award for protecting the Secretary of Commerce and his delegation during a trade mission to Iraq and Afghanistan in 2003. He has conducted Executive Protection for six Secretaries of Commerce.

Harold has completed the Wharton Executive Education Security Executive Program, University of Pennsylvania; the Massachusetts Institute of Technology, (MIT) Sloan School of Management: Building, Leading, and Sustaining the Innovative Organization and the Harvard University, John F. Kennedy School of Government Executive Education Courses: Leadership for the 21st Century and the Cybersecurity: The Intersection between Policy and Technology. He holds a Master’s in Business Administration (MBA) from Columbia Southern University; a Master’s Certificate in Project Management from the George Washington University; a Bachelor’s of Science degree from the University of Maryland, University College. He is a graduate of the Federal Executive Institute, Leadership for a Democratic Society and attended Homeland Security Training in Israel; the Department of State Diplomatic Security, Protective Security/LEO Course; and the Department of the Navy, Explosive Ordnance Disposal (EOD), Improvised Explosive Device (IED) Course and the Senior Officer Nuclear Accident Course.

He has five adult children, holds a 1st degree Black Belt in Nisei Goju Ryu and Goju Karate, is an avid motorcyclist (on/off road), and a weekend golfer. He is a member of the Fraternal Order of Police DC Lodge #1; Federal Law Enforcement Officers Association, Air Force Security Police Association and ASIS International.