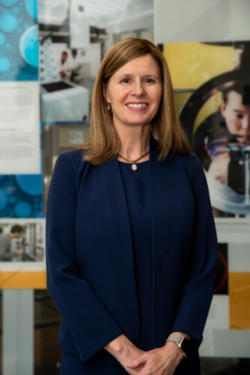 Laurie E. Locascio is the 17th director of NIST and the fourth Under Secretary of Commerce for Standards and Technology. In this role, she provides high-level oversight and direction of NIST.

Dr. Locascio most recently served as vice president for research at the University of Maryland College Park and University of Maryland Baltimore, where she focused on the development of large interdisciplinary research programs, technology commercialization, innovation and economic development efforts, and strategic partnerships with industry, federal, academic and nonprofit collaborators. She also served as a professor in the Fischell Department of Bioengineering at the A. James Clark School of Engineering with a secondary appointment in the Department of Pharmacology in the School of Medicine.

Before joining the University of Maryland, Dr. Locascio worked at NIST for 31 years, rising from a research biomedical engineer to eventually leading the agency’s Material Measurement Laboratory (MML). She also served as the acting associate director for laboratory programs, the No. 2 position at NIST, providing direction and operational guidance for NIST’s lab research programs.

As director of MML, one of NIST’s largest scientific labs, Dr. Locascio oversaw 1,000 research staff in eight locations around the United States and a $175 million annual budget and recruited top talent, fostered excellence, and built a collegial and collaborative workplace. She implemented strategic partnerships with universities, industry and other government labs, including a partnership with the University of Maryland’s Institute for Bioscience and Biotechnology Research at the Universities at Shady Grove. Before that, Dr. Locascio served as chief of MML’s Biochemical Sciences Division.

Dr. Locascio’s most recent honors and awards include the 2021 induction as a fellow of the National Academy of Inventors, the 2017 American Chemical Society Earle B. Barnes Award for Leadership in Chemical Research Management, and the 2017 Washington Academy of Sciences Special Award in Scientific Leadership. She has published 115 scientific papers and has received 12 patents in the fields of bioengineering and analytical chemistry. Her honors and awards also include the Department of Commerce Silver and Bronze Medal Awards, the American Chemical Society Division of Analytical Chemistry Arthur F. Findeis Award, the NIST Safety Award and the NIST Applied Research Award. She is also a fellow of the American Chemical Society and the American Institute for Medical and Biological Engineering.