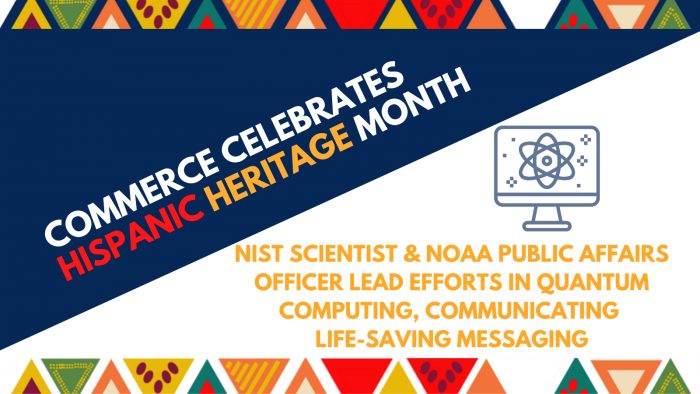 Each year, Americans observe National Hispanic Heritage Month and pay tribute to the generations of Hispanic Americans who have positively influenced and enriched our nation and society and are making an impact at the Department of Commerce and on behalf of all American communities. Quantum computers are one of the holy grails of scientific research. These computers rely on controlling the quantum states of individual (artificial or natural) atoms. They could solve problems that would take today’s most advanced supercomputers days — or, in some cases, years — to solve, such as performing simulations of molecule interactions or calculating complex logistics. Applications of quantum computer can include artificial intelligence, cybersecurity, and improving the lifespan of batteries.

Quantum computers still have a way to go before they reach their full potential, but for NIST physicist Manuel Castellanos Beltran, it’s an incredible goal to work toward, and not one he had imagined being part of while growing up in Veracruz, Mexico.

“In the last 100 years, technology has developed so far that we can do experiments that the founders of quantum mechanics never believed would be possible. It’s very satisfying to see that,” he said. “I’m very excited to help in developing that goal.”

Castellanos always liked science, but he found his love for physics when his high school teacher encouraged him to enter the once every four years Physics Olympiad. He did so well in the competition that he received a scholarship to study physics as an undergraduate in Monterrey, Mexico.

His professors were adamant that he should study in the United States if he wanted to pursue physics as a career. Fortunately, the school had a good exchange program with the University of Colorado Boulder, and Castellanos came to Boulder for a semester. He later returned for his graduate degree, working with the Lehnert group at JILA, a joint research institute of NIST and the University of Colorado Boulder.

After two years of doing postdoctoral work at Yale, he missed the mountains and the life outdoors of Colorado. He joined the advanced microwave photonics group at NIST in Boulder. Today he works with NIST’s superconducting electronics group, pursuing the goal of developing quantum computing technologies.

The building blocks of quantum computing technologies, known as qubits, need to be very cold to work, so they are housed in powerful refrigerators. Precisely controlling the qubits inside those refrigerators requires a room full of electronics. Shrinking the size of these electronic components, and moving the electronic controls inside the refrigerator, would reduce the bulk of equipment needed to control the computer.

It’s not as easy as it sounds, but the best part about doing this work at NIST is being a part of a collaborative and supportive scientific community, Castellanos says.

“I love the scientific community of NIST,” he says. “You can always find an expert — or close to one — in any problem or difficulty you have. Besides that, scientists at NIST tend to be very open to help you even if you are not in their group or project.”

As a Hispanic scientist growing up in Mexico, Castellanos says he always had Hispanic professors and mentors who guided him and helped prepare him to come to the U.S. Today, he works to ensure that Hispanic students in his community know there are opportunities for them as well.

“As an immigrant, I take pride in my origin and the culture that I brought with me to this country. I had great mentors both in my undergraduate studies back in Mexico as well as here in graduate school,” he says. “As a scientist that belongs to underrepresented groups, I try to represent the Hispanic community by participating in school activities — science fairs, or just going to talk to schools that serve minority students — to show that there are Hispanic scientists.” Maria Torres-Falcón has dedicated her career to ensuring that NOAA’s life-saving weather information is available to everyone. As the Public Affairs Officer and a bilingual spokesperson for NOAA’s National Hurricane Center in Miami, Florida, Maria’s communications expertise – in English and Spanish– helps keep people safe during tropical events.

Torres-Falcón’s early passion for weather and science led her to Florida State University (FSU), where she received a B.S. in Meteorology in 2009. During her time at FSU, she also worked with NOAA’s National Weather Service (NWS) in the Miami Florida forecast office as a student trainee.

She then worked for the NWS in Albuquerque, New Mexico, and Brownsville, Texas. In Brownsville, Torres-Falcón significantly expanded outreach and decision support programs, providing service to the Hispanic community, as well as enhanced tropical weather information in Spanish. Her efforts to improve Spanish-language weather safety information for vulnerable communities in South Texas were recognized with the NOAA Employee of the Month Award, a U.S. Department of Commerce Bronze Medal Award for the Brownsville NWS team, and the 2016 National Weather Association Public Education Award.

“I’ve had the unique opportunity to integrate my Spanish language heritage to my profession's mission of messaging preparedness, awareness, and safety,” says Torres-Falcón. “This has allowed me to bring front and center the need for Spanish-based services to NOAA.”

Torres-Falcón returned to Florida in 2016, working as a forecaster at the NWS Miami office, quickly continuing to expand access to bilingual weather information. She moved to the National Hurricane Center in 2018, initially responsible for producing marine weather forecasts, which are widely utilized by ocean-going vessels in the Gulf of Mexico, Caribbean Sea, the tropical and subtropical waters of the western Atlantic Ocean and eastern Pacific Ocean. She also served as a bilingual spokesperson for media interviews.

Beginning in March of 2022, Torres-Falcón became the Public Affairs Officer for the National Hurricane Center– a critically important role that involves coordinating the intense media demand during events of landfalling hurricanes and tropical storms. She works closely with television, radio, and social media outlets, as well as partners in emergency management, state, and local governments, and throughout NOAA in order to advance the public’s knowledge and awareness about preparation and response during hurricane events. She also continues to serve as an NWS bilingual spokesperson.

“Hispanic Heritage Month connects to my work at NOAA and my personal values,” Torres-Falcón says. “At a personal level, it has been crucial the fact that my family understands the sacrifices this line of work demands, and the perseverance that has allowed us to be here today, which has given me the opportunity to grow immensely in my profession, and to offer a brighter future for my son.”

Torres-Falcón continues to support opportunities for future generations by participating in STEM education programs throughout South Florida. She advises aspiring young meteorologists to bring their best efforts and aspirations to the world of weather and serves as an inspiration to motivate them to reach their dreams.

At the Department of Commerce, we recognize that America’s diversity has always been our greatest strength. The Hispanic American community is deeply rooted in the history of the United States and is an integral part of the rich fabric of our nation. True to our mission of creating the conditions for economic growth and opportunity—for all Americans—the Commerce Department works every day to support and invest in the Hispanic business community.

NOAA’s Office of Education provides educational resources and development opportunities for students ranging from pre-K through post-graduate levels. Graduate students are encouraged to apply for several immersive fellowships, such as the Sea Grant John A. Knauss Marine Policy Fellowship, that put them at the center of marine science and policy decision-making in Washington DC. NOAA is also dedicated to sharing the latest climate, ocean, weather, and space science with teachers.

NIST has programs for high-school students, undergraduates, and recent graduates. More information, including eligibility and deadlines, is on NIST’s Student Employment page. The NIST NRC Postdoctoral Research Associateships Program for recent Ph.D. graduates is another great opportunity to explore science and technology careers.