Assistant Secretary for Export Enforcement
Bureau of Industry and Security 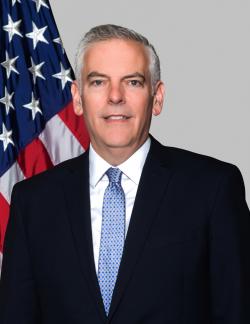 Matthew S. Axelrod was unanimously confirmed by the United States Senate and currently serves as the Assistant Secretary for Export Enforcement at the U.S. Department of Commerce’s Bureau of Industry and Security.

In this capacity, Matt leads an elite cadre of special agents and analysts dedicated to the enforcement of the country’s export control laws. Matt and his team protect and promote U.S. national security and foreign policy objectives by stopping exports of sensitive goods and technologies that can be put to malign purposes like weapons-of-mass-destruction proliferation, military and military-intelligence applications, terrorism, and human rights abuses. They also work to ensure U.S. persons do not participate in unsanctioned foreign boycotts.

Matt has also previously served as Special Counsel in the Office of the White House Counsel, where he worked on both domestic and national security matters, and as a partner in an international law firm, where he did internal investigations and white-collar defense work on behalf of companies and individuals. Matt was also one of the founding corps members at City Year, a forerunner and inspiration for the eventual AmeriCorps national service program.