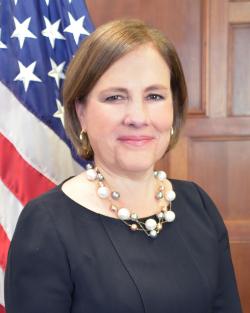 Before joining the Department of Commerce, Ms. Kiernan served from February to June 2021 as Special Counsel in the Office of the White House Counsel. During the Obama-Biden Administration, Ms. Kiernan served in the White House as Deputy Counsel to the President from 2011 to 2014, where she advised on a wide range of compliance, risk management, policy, and oversight issues. She also served as counsel to the White House Council on Women and Girls, and to the office of the First Lady.  From September through December 2014, she served in the U.S. Department of State as a senior advisor to the U.S. Mission to the United Nations, where she represented the U.S. in the 69th Session of the General Assembly and advised on a variety of legal and policy matters.

In addition to her government service, Ms. Kiernan has over 20 years of experience as a litigation partner at national law firms in Washington, D.C., where her practice focused on representing private entities, public agencies, and individuals in enforcement proceedings, criminal and congressional investigations, and compliance matters.  She served as the Vice-Chair of the Board of Directors of Children’s National Hospital and Chair of its Enterprise Risk, Compliance, and Legal Affairs Committee, and on the boards of the Children’s Law Center and the D.C. Public Defender Service.   Ms. Kiernan is a graduate of Brown University and Georgetown University Law Center, where she served as Senior Articles Editor of the Georgetown Law Journal.

Ms. Kiernan currently serves as a government member of the Council of the Administrative Conference of the United States (ACUS), having been appointed by President Biden on September 30, 2021.