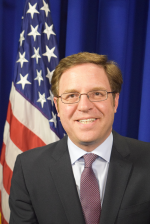 Alan Davidson is an Internet policy expert with over 20 years of experience as an executive, public interest advocate, technologist, and attorney. He was most recently a Senior Advisor at the Mozilla Foundation, a global nonprofit that promotes openness, innovation, and participation on the Internet. He was previously Mozilla’s Vice President of Global Policy, Trust and Security, where he led public policy and privacy teams promoting an open Internet and a healthy web. Alan served in the Obama-Biden Administration as the first Director of Digital Economy at the U.S. Department of Commerce. He started Google’s public policy office in Washington, D.C., leading government relations and policy in North and South America for seven years until 2012.

Alan has been a long-time leader in the Internet nonprofit community, serving as Director of New America’s Open Technology Institute where he worked to promote equitable broadband access and adoption. As Associate Director of the Center for Democracy and Technology, Alan was an advocate for civil liberties and human rights online in some of the earliest Internet policy debates. Alan currently resides with his family in Chevy Chase, Maryland. He is a graduate of the Massachusetts Institute of Technology and the Yale Law School and is a member of the District of Columbia Bar.