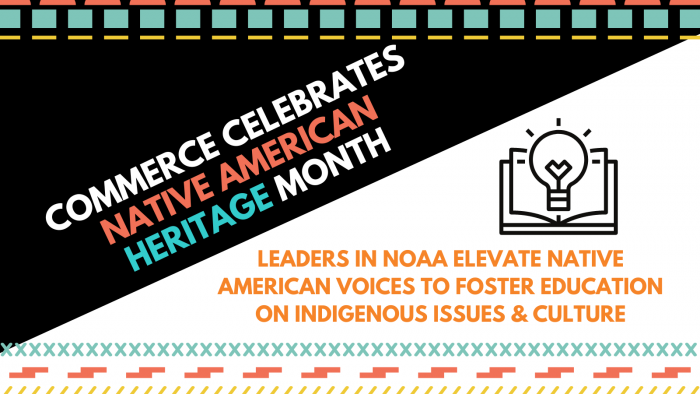 During National Native American Heritage Month, the Department of Commerce is paying tribute to the sacrifices, contributions, and achievements of Native Americans and honoring their cultural heritage. In recognition of this month, the Commerce Department’s National Oceanic and Atmospheric Administration (NOAA) celebrates Tracy Boze and James Daugomah, two outstanding employees who, among other significant contributions, serve as co-chairs to NOAA’s American Indian Alaska Native Employee Resource Group (ERG). The ERG is a crucial resource to elevate Native voices within the agency and foster education on Indigenous issues and culture. Tracy works for NOAA’s National Marine Fisheries Service and James works for NOAA's National Ocean Service.

Below is a brief description of each employee and a few questions and answers that describe their Native American heritage and how it relates to their jobs at NOAA, what inspires them, and why they chose to serve as leaders in the American Indian Alaska Native Employee Resource Group (ERG). James Daugomah grew up in Yukon, OK, and is enrolled as a member of the Kiowa Tribe of Oklahoma and also is half Navajo. James currently works as an Environmental Scientist with NOAA’s National Ocean Service, National Centers for Coastal Ocean Science in Charleston, SC. There he conducts research that includes studying the effects of land use on marine organisms and ecotoxicology. Tracy Boze is a Tlingit from the Raven Moiety, Kaach.ádi (frog) clan in SE Alaska, granddaughter to a Chief, and a proud Alaska Native. Tracy works as an Investigative Support Technician with NOAA’s National Marine Fisheries Service in Seattle, WA. There she is a steward of the environment by providing support in a variety of law enforcement activities, programs, and contact with partners and the public.

Personal reflections on your path to NOAA:

James: Prior to completing my undergraduate degree at Oklahoma State University, I had never been east of Oklahoma; so, I took a job on the East coast to see places where I’d never been. The first research project I was hired for was a research partnership between the University of South Carolina and the National Marine Fisheries Service (NMFS) I was fortunate that the project leader who initially hired me saw my potential, which ultimately resulted in a permanent position at NMFS.

During my time at NMFS, I was afforded the opportunity to continue my education by earning a master’s degree in environmental studies.

Tracy: I wanted to work for the Federal Government when I learned that my grandparents had also worked as civil servants. Growing up, they didn't speak much of their work, but I know it was not easy for them. Their generation was not one to complain, and they were fortunate to have their jobs, especially at a time when young people were traditionally placed in boarding schools, away from their families. So, when it came time to look for a new job, I was referred to a state and county contracting position with the National Marine Fisheries Service (NMFS) Office of Law Enforcement (OLE) working on the new Individual Fishing Quota (IFQ) program roll-out.  I had kept that position for just over 6 years. After a small break with the county and state government, I returned to OLE just over 2 years later and was hired as a full-time employee.

Are there any values of your heritage or culture that contribute to your job?

James: My upbringing in the Kiowa/Navajo traditions and ceremonials certainly has influenced my job as a scientist. I was taught from a young age that all things have a place in our world. A lesson I recall is around the age of 6 years old, stirring up an ant pile and receiving a stern correction from my grandfather that the ants serve a purpose and that we need to respect that purpose. I have also been taught during ceremonial events that there is always a protocol to follow and to respect the process. This way of thinking is important in conducting laboratory experiments and other methodologies, like field protocols while collecting field data such as sediment, water or tissue samples.

Tracy: Something wonderful about the Alaska Native culture that I bring is the love of storytelling. My grandfather was a storyteller, and I have always enjoyed listening to him speak and share his stories. We all have a story to tell and being a part of NOAA’s American Indian Alaska Native Employee Resource Group (ERG) gives us a voice, a platform, and a community that we can all lean on, learn from, and encourage.

Why are you a co-chair to the AIAN ERG?

James: I think that my role as co-chair of the AIAN ERG is to encourage the team to be creative and participate across the different Native American heritage programs across the Commerce Department. I try to remember that our group brings a unique perspective that can show all Commerce agencies the things they may not have considered such as life and work experiences.

When NOAA first began assembling the American Indian Alaska Native Employee Resource Group (ERG), I attended the first meeting and initially took a quiet “bird on the fence” role. I liked the team and felt comfortable with the group. Within a year, there was an opportunity to become a co-chair, and I felt compelled to step up. I made several excuses to myself initially, but I knew they were just that, and I don’t regret my decision.

Tracy: Looking back, I can remember that it was at the end of the calendar year of 2019 when NOAA staff received an email seeking volunteers to assist the Office of Inclusion and Civil Rights (OICR) in Native American education and outreach. There I found a place I was proud to be part of and jumped at the chance to be a leader, hoping to bring creativity, passion, and encouragement to the team.  Being a co-chair, these last several years have been so incredibly fulfilling, and I am grateful for the opportunity to put my name in for another term.

What do you enjoy most about your job at NOAA?

James: I have had many opportunities in my career and learned from many people. The part of my job that I enjoy the most is teaching younger scientific staff and students. I primarily conduct field research which requires attention while working. I also like that I have the opportunity to work with NOAA staff from different regions and various line offices.

Tracy: The best part of my job is knowing that we all make a difference, and my job in the Enforcement Office has a significant impact on the sustainability of fisheries for future generations.

James: I am inspired by people who keep doing the best they can even when it seems that there is no solution. I am inspired by the optimism I see in younger scientific staff; it can be easy to forget that they have not had the experiences I have, and I enjoy passing those experiences on to them.

I am also inspired by and proud of my family's public service tradition.

Tracy: Earlier this year, during my son’s senior year of high school, he made the decision to join the U.S. Military and is currently training to become a U.S. Marine.  When he listed the reasons, he wanted to serve, at the top, he said that there were many superheroes that go beyond comic books and movies. He said that there are everyday heroes that serve the community and nation.  He looked at my husband and me and said that we each are heroes in our work. Nodding to me, he said that NOAA serves to protect our nation's waters and then looked to his father and said that he was a hero for protecting people's well-being and coverage needs in his role as a Clinical Appeals Representative. It brought us to tears to think that even our professions had an impact on his path. He then said that he, too wanted to be a hero like us. “Gasp!”.

Hearing his words with the same mindset I had with my grandparents for wanting to serve our community runs deep and is so rewarding.