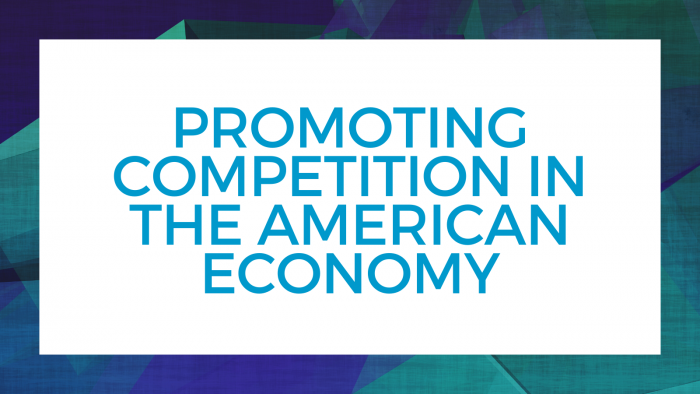 One year ago, President Biden issued the Administration’s Executive Order on Promoting Competition in the American Economy. Since then, the Department has worked tirelessly to advance the American promise of broad and sustained prosperity.

Through this Executive Order, the President is helping Americans protect their health and the health of their loved ones, in part by making prescription drugs more affordable. The U.S. Patent and Trademark Office (USPTO) and Federal Drug Administration (FDA) have been working closely together on initiatives to increase access and lower prescription drug prices, while continuing to protect the important contributions and lifesaving treatments developed by the pharmaceutical industry that make the United States a global leader in new drug development. Just last week, the USPTO and the FDA outlined key joint initiatives.

The USPTO and National Institute of Standards and Technology (NIST) also led the Department of Commerce’s efforts concerning potential abuses of the standard-setting process and our patent system by working with the Department of Justice (DOJ) to reconsider the 2019 Standards-Essential Patents policy statement. After considering public input on the 2019 Statement and possible revisions, the USPTO, NIST, and DOJ withdrew the 2019 Policy Statement and maintained the withdrawal of the 2013 statement.

Hear from Under Secretaries Vidal and Locascio about how the Department of Commerce plays a critical role in increasing America’s competitiveness through standards development:

“The U.S. Patent and Trademark Office is focused on creating incentives to generate more innovation, especially in underserved communities and in key technology areas, and maximizing that innovation’s widespread impact,’ said Under Secretary of Commerce for Intellectual Property and USPTO Director Kathi Vidal. ‘Forging our global leadership in new industries cannot happen without greater investment in research and development in technologies that may become international standards. We also need greater U.S. engagement in global standards-setting organizations from our large multinational companies, as well as from small- to medium-sized businesses and start-ups. I stand behind any measure that will enable innovation that will drive sustainable, long-term growth in the U.S. economy.”

“The withdrawal of the 2019 Statement will strengthen the ability of U.S. companies to engage and influence international standards that are essential to our nation’s technology leadership and that will enable the global technology markets of today and tomorrow,’ said Under Secretary of Commerce for Standards and Technology and NIST Director Laurie E. Locascio. ‘A common thread in so many of the thoughtful stakeholder comments we received is a commitment to America’s industry-led, voluntary, consensus-based approach to standards development. This approach consistently delivers the best technical solutions, and I wholeheartedly support it.”

As part of Commerce’s effort to allow all Americans to participate in our economy, USPTO is making the Council for Inclusive Innovation (CI²) a top priority. Furthering the President’s objective that we take a ‘whole-of-government’ approach to competition policy, a number of agencies are involved in both the Council and the working groups. With the most recent data from the USPTO indicating that only 12.8% of inventors listed on patents granted in a single year are women, and little to no data on the participation of other underrepresented groups, there is much work to be done to build a stronger and more inclusive innovation sector.

The USPTO recently announced its inclusive innovation webpage that links creators, innovators, and entrepreneurs everywhere with the support they need to protect their intellectual property and bring their ideas to market. In addition to finalizing a national strategy, CI² is also working to roll out other initiatives that will expand innovation including into underrepresented communities.

CI² builds on the USPTO’s other efforts, including K-12 programming around innovation, partnering with the National Inventors Hall of Fame on Camp Invention and other invention education programs, accelerating patent prosecution for applicants innovating in the green, cancer immunology and COVID-19 spaces, and working across the USPTO including the regional offices to collaborate with the SBA, the MBDA and other organizations to support the growth and protection of small businesses.

The USPTO is also working to support individual innovators and small to medium-sized businesses by infusing more money into, and expanding, pro bono legal services. Recent data shows that when we meet people where they are and give them the support they need, we reach a diverse group of innovators. Indeed, 41% of those involved in USPTO’s pro bono efforts identify as women, 30% as African American, 14% as Hispanic, 5.6% as Asian American or Pacific Islander and 1.5% as Native American. The USPTO also launched new programs that provide free legal services to qualifying inventors and entrepreneurs with certain types of patent and/or trademark business before the USPTO.

To help curb counterfeiting, piracy and cyber-attacks that cost the U.S. economy up to $600 billion a year, the USPTO finalized implementation of the TMA (Trademark Modernization Act) to provide businesses with powerful new tools to protect their brands and enable the USPTO to strengthen the integrity of the critical U.S. trademark register. The USPTO works closely with other federal agencies to protect and enforce intellectual property rights of U.S. companies. Further, the USPTO is working with the National Crime Prevention Council (NCPC) to launch the second public service announcement in the Go For Real campaign – in addition to other industry groups – to change the dialogue and understanding around counterfeits and piracy. Finally, the USPTO is working across government and with the Cybersecurity and Infrastructure Security Agency (CISA) to help small to medium sized business protect their IP from cyber-attacks.

For more information on the Competition EO, please see the White House website.