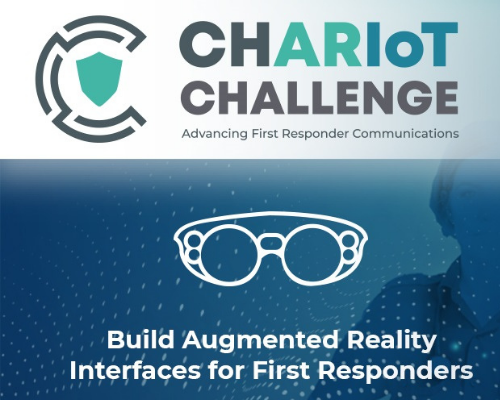 Firefighters, police officers, and other public safety workers could use data from multiple internet-connected devices to save lives. However, most off-the-shelf technology doesn’t work for public safety users.

Imagine firefighters crawling on their hands and knees through a smoky environment; they can’t tactilely handle — let alone see — a smartphone to access maps or building data or receive notifications that might otherwise inform and aid in their mission. Additionally, too many notifications would distract the first responder. That’s why NIST’s CHARIoT Challenge focused on developing a unified interface that could display information without impeding a public safety user’s mission.

Successful prototypes in the CHARIoT Challenge found the right balance of information to present on the AR interface. For the IoT track, there were two final winners:

Team SmartIoT created a data appliance to transmit several data streams in multiple protocols (MQTT, HTTP, HTTPS) in multiple formats (JSON, XML) to multiple network clients using small single-board computers with the ability to transmit at different intervals. Additionally, simulated data and real data from sensors could be transmitted using the same device. The device analyzes, transforms, and supplements data streams on the fly using artificial intelligence and other techniques in a scalable and pluggable architecture. There were seven winners for the AR interfaces track:

Team JANUS’s solution set out to enable end-users to intuitively interact with and manipulate the virtual objects through its Incident Response Augmentation Headset (IRAH) platform. The team took a user-centered design approach for each of the four scenarios, first taking a rough sketch, transforming it to a mock-up, and then collaborating directly with subject matter experts at the Western Fire Chiefs Association. As a result, it was able to integrate public safety partner input and guidance to shape its designs and ensure interfaces best meet the needs of first responders.

Team North Star Simulations’ Incident Command Simulation Platform (ICSP) focused only on the active-shooter scenario, which it developed and designed in conformance with the National Incident Management System (NIMS) standards published by FEMA. It focused on the training aspect of the disaster and emergency scenario-based simulations as a storytelling tool to empower incident commanders to streamline their operations.

RespondAR from NextGen Interactions is a prototype AR interface that demonstrates how emerging technologies might be utilized by first responders in the future. Focusing on the mass transit accident scenario, its overarching goal was to make an intuitive interface that provides IoT data to first responders. For incident command, it provided an overview of the map and corresponding data with the ability to look at data in detail as needed. For the heads-up display, it provided only the most relevant information so as to not overwhelm first responders.

Additional information about all the final CHARIoT Challenge winners and the prizes they won can be found here.

The prototypes developed through the CHARIoT Challenge can make a substantial impact on public safety organizations. However, the work is not over yet. Several of the CHARIoT winners shared their plans to continue and advance their efforts for first responders. As part of NIST’s commitment to ensuring that products get into the hands of first responders, NIST currently offers two commercialization programs for innovators: the PULSE Accelerator and a funding opportunity for technical and business assistance (TABA) or a demonstration project with public safety.

To address the lack of public safety data sets available for researchers, developers, and innovators, NIST and the two IoT finalists have open-sourced the emulated IoT data sets for the four emergency scenarios from the CHARIoT Challenge. The data demonstrates situational awareness information that would be provided to a first responder or an incident commander. To access the NIST IoT Data Emergency Scenarios data repository, please visit NIST’s Github.

Those who are interested in applying for research funding related to the public safety technology marketplace should consider submitting an application to the PSIAP-2022 funding opportunity by Jan. 18, 2022. To stay up to date on NIST’s PSCR Division and future prize challenges, be sure to subscribe to the PSCR newsletter.

Bureaus and Offices
National Institute of Standards and Technology