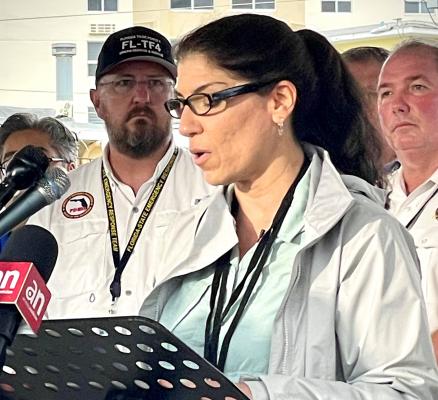 NIST Disaster Scientist Judy Mitrani-Reiser addresses a press conference on the technical investigation of the collapse of the Champlain Towers South condominium in Surfside, Florida.

Observed annually from September 15—October 15, Hispanic American Heritage Month is a time to reflect upon and celebrate the remarkable role of the Hispanic community in our Nation’s history. President Biden has made equity and equality a top priority for his Administration. In his recent Proclamation on National Hispanic Heritage Month, he stresses, "Hispanics cannot succeed unless Hispanic families and communities succeed, sharing equally in the benefits of our Nation’s recovery and our investments."

The Department of Commerce is proud to join the President and the Nation in recognizing National Hispanic American Heritage Month and honoring and celebrating the contributions of Hispanics to our Nation. Through the Commerce Department’s diverse range of agencies, Commerce Secretary Gina Raimondo is committed to building back better and more equitably through job creation and economic growth.

Hispanic Heritage Month also is a time to recognize the many contributions and achievements within the Hispanic community that have had a positive impact on our Nation. Below are a few leaders who, through their innovation, expertise, and entrepreneurship, have made a significant contribution to the Commerce Department’s mission to drive business expansion and economic growth and accelerate American leadership in the areas of disaster science, invention, and entrepreneurship. Throughout 1980, fleets of boats departed from Cuba, carrying emigrants to the U.S. by the thousands — an event known as the Mariel boatlift. One passenger was Commerce’s National Institute of Standards and Technology’s (NIST) Judy Mitrani-Reiser, who was just a toddler at the time. Growing up in Miami, Judy was inspired by engineers in her family and internships with a forensic engineering firm and encouraged by her schoolteachers to pursue a career in STEM. She did just that, becoming an expert in earthquake engineering years later. Judy has greatly expanded her portfolio since, gaining expertise in numerous types of disasters and taking on roles as a professor, mentor, national program director and associate chief of the materials and structural systems division at NIST.

Today, Judy is at the head of the National Construction Safety Team (NCST) announced by NIST in August 2021 to carry out a technical investigation of the collapse of the Champlain Towers South condominium in Surfside, Florida, a stone’s throw from her late grandmother’s home. At the same time, she is a playing a key role in an NCST investigation of Hurricane Maria’s impact on Puerto Rico in 2017. Judy’s responsibilities also extend to managing and providing oversight to two other statutory disaster programs — the National Windstorm Impact Reduction Program and the National Earthquake Hazards Reduction Program — focused on interagency coordination to reduce losses in the U.S. from disasters and failures.

Judy is vice president of the Board of Directors of the Earthquake Engineering Research Institute (EERI), serves on the Executive Committee of Collaborative Reporting for Safer Structures US (CROSS-US), and co-founded the American Society of Civil Engineers’ (ASCE) Multi-Hazard Risk Mitigation Committee.

No matter her role, Judy is focused on building an inclusive workplace, as evidenced by the several NIST awards she has earned for boosting morale and promoting the careers of Hispanic American employees. She values mentorship and feels an immense responsibility to her trainees (dozens of students and postdoctoral scholars, and researchers) from throughout her career. She regularly participates in workshops, webinars and seminars aimed at supporting the budding careers of women and underrepresented minorities in STEM fields.

As an established Hispanic woman and leader in disaster science, Judy hopes to instill the same inspiration and encouragement in others that sparked her own career. Jordi Munoz is the Co-Founder of 3D Robotics based in San Diego, California. Munoz immigrated from Tijuana, Mexico in 2007. Since then, Muniz has met challenging situations with positivity, ingenuity, and entrepreneurship. At the time, Muñoz, was a 20-year-old Mexican immigrant who had just arrived in the United States. As he was waiting for a green card, he passed time by building a drone prototype in his garage out of a video gaming console's remote control. Munoz manipulated the sensors on his gaming console and built the world’s first auto-piloted drone. Today, 3D Robotics Inc is the largest U.S and Hispanic owned commercial drone manufacturer in the country. Born in California, Ellen Ochoa was granted U.S. Patent 4,838,644 for "Position, Rotation, and Intensity Invariant Recognizing Method " and two other optical-related patents for an optical inspection system, an optical object recognition method, and a method for noise removal in images. Her inventions significantly increased the ability to capture and analyze finely detailed imagery, including applications in space and on the Earth. Ochoa was the first Hispanic woman to go to space when she served on a nine-day mission aboard the shuttle Discovery in 1993. Dr. Luis Von Ahn was granted U.S. Patent 8,555,353 for his invention, CAPTCHA, which helps distinguish human from machine input to prevent spam. In addition to keeping passwords and bank accounts safe, his work uses human computation to help decode previously untranslated words. Over 13 million books have been digitized using von Ahn's system. He owns multiple U.S. patents and has licensed some of them to major internet companies.