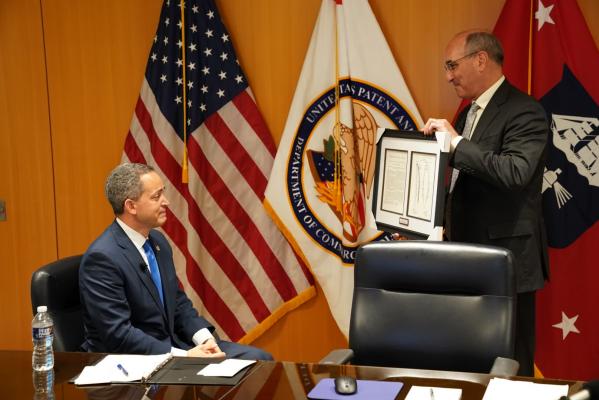 On July 1, 2021, U.S. Deputy Secretary of Commerce Don Graves visited the Commerce Department’s U.S. Patent and Trademark Office (USPTO) headquarters in Alexandria, VA. During his visit, he toured the National Inventors Hall of Fame museum, experienced a “day in the life” of a patent examiner and a trademark examining attorney, and met with leadership about the USPTO’s role in advancing American competitiveness. He later received a surprise framed copy of his ancestor’s patent who was one of the Nation’s first Black patent holders.

The National Inventors Hall of Fame® (NIHF) museum is located at USPTO headquarters and tells the story on American innovation and showcases famous inventors including Thomas Edison, the Wright Brothers and George Washington Carver. During his tour of the museum, Deputy Secretary Graves viewed the inspiring Gallery of Icons™ commemorating each of the more than 550 National NIHF Inductees, and saw first-hand the vast innovative advancements in automotive, photographic, and smartphone technologies via the museum’s Intellectual Property Power exhibit. Deputy Secretary Graves also learned about NIHF’s numerous invention education programs, focused on inspiring America’s youth to pursue careers in STEM. Deputy Secretary Graves then participated in a tour where he visited five USPTO buildings, the Public Search Facility, the Global Intellectual Property Academy, the Clara Barton Auditorium and the Patent Trials and Appeals Board hearing room. He then participated in a “day in the life” of an examiner and heard from each business unit head at the USPTO to better understand their work and role at the USPTO. USPTO employs thousands of patent examiners and trademark examining attorneys that work regularly with inventors and entrepreneurs on intellectual property matters.

“The work you do is rooted in the fabric of America,” Deputy Secretary Graves told them. “Your work and the work of all your examiners provides the incentives for inventors to create things we never thought possible. And those inventions are commercialized into globally competitive companies that create jobs right here in the U.S.”

Deputy Secretary Graves later held a meeting with Drew Hirshfeld, performing the functions and duties of the Under Secretary of Commerce for Intellectual Property and Director of the USPTO, and other USPTO leadership on the important role USPTO plays in American competitiveness. During that discussion, Deputy Secretary Graves praised them for reaching Patent Number 11 million as an important milestone in American innovation and ingenuity. Deputy Secretary Graves met with Drew Hirshfeld, performing the functions and duties of the Under Secretary of Commerce for Intellectual Property and Director of the USPTO. Photo by Jay Premack/USPTO.

“Patents and trademarks are fuel for our economy by enabling the creation of new products, new businesses, and entirely new industries that have the potential to change the world,” he said.

Before his visit concluded, Deputy Secretary Graves was presented with a copy of his ancestor’s patent. Deputy Secretary Graves comes from a long line of small business owners and has a rich family history connected to the Commerce Department. His four-times great grandparents built a successful horse and buggy taxi business in Washington that once stood at the site of the Commerce Department’s headquarters. Their son went on to own a premier hotel just blocks away and become one of our nation’s first Black patent-holders through Commerce’s U.S. Patent and Trademark Office. “It was a wonderful surprise to receive a copy of my ancestor’s patent from the USPTO. Thinking back on my family’s roots, in this country, you can achieve anything you want — with a little help,” said Deputy Secretary Graves. Today, I still draw on the lessons of my family history for inspiration and today is a moment I will never forget.”