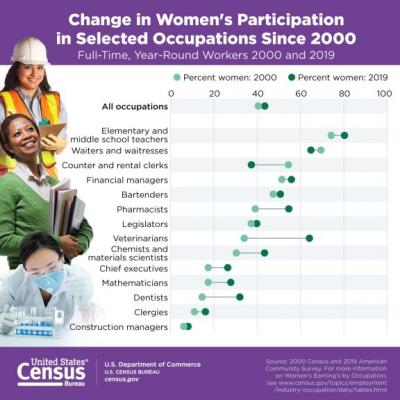 U.S. Census Bureau Graphic on Change in Women's Participation in Selected Occupations from 2000-2019.

The following is a cross-post by the U.S. Census Bureau

National Women’s History Month traces its roots to March 8, 1857, when women from various New York City factories staged a protest over poor working conditions. The first Women's Day celebration in the United States was in 1909, also in New York City. More than seven decades later, Congress in 1981 established National Women's History Week to be commemorated annually the second week of March. In 1987, Congress expanded the week to a month, and every year since has passed a resolution designating March Women’s History Month. And the president has issued a proclamation. See this year's proclamation.

As we celebrate Women’s History Month 2021, we reflect upon advances women have made over the last decade. Women have increased their earnings and education, fields of occupation and continued to live longer than men. Below are stats from Census Bureau surveys highlighting how women’s employment has changed over the years. We appreciate the public’s cooperation in helping us measure America’s people, places and economy.

For more key statistics such as the number of women veterans, earnings by women and the percentage of women who earned a degree, please see the latest issue of the U.S. Census Bureau's Facts for Features for Women's History Month: March 2021.