Facts for Features consist of collections of statistics from the Census Bureau's demographic and economic subject areas pertaining to holidays, anniversaries, observances or topics in the news. The data are intended to assist media in writing feature stories on these commemorations, which range from Hispanic Heritage Month to the Holiday Season.

For all previous Facts for Features, please visit: 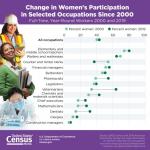 The following is a cross-post by the U.S. Census Bureau National Women’s History Month traces its roots to March 8, 1857, when women from various New York City factories staged a protest over poor working conditions. The first Women's Day celebration in the United States was in 1909, also in New York City. More than seven decades later, Congress in 1981 established National Women's History Week to...
Census Facts for Features
Women's History Month

The following is a cross-post from the U.S. Census Bureau To commemorate and celebrate the contributions to our nation made by people of African descent, American historian Carter G. Woodson established Black History Week (then called “Negro History Week”) nearly a century ago. The event was first celebrated during the second week of February 1926, selected because it coincides with the birthdays...
African American History Month
Census Facts for Features