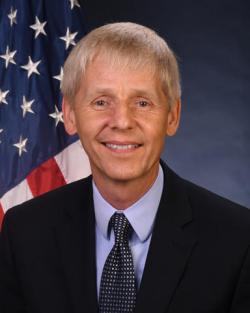 Dr. Olthoff is the Associate Director for Laboratory Programs. He provides direction and operational guidance for all of NIST's scientific and technical laboratory programs, and serves as principal deputy to the Under Secretary of Commerce for Standards and Technology and NIST Director, among other duties. He has held that position since 2018.

Previously, Dr. Olthoff served as the Director of Physical Measurement Laboratory (PML) where he was responsible for the maintenance, development, and dissemination of the U.S. national measurement standards system, and oversaw NIST’s world-class programs in quantum computing, neuromorphic computing, and quantum measurement standards. He also directed the full suite of NIST calibration services in dimensional, electromagnetic, ionizing radiation, mechanical, optical, thermodynamic, and time and frequency metrology.

Dr. Olthoff joined NIST (then the National Bureau of Standards) as a Research Physicist in the Applied Electrical Measurements Group in 1987. In 2014, he was named Director of the Physical Measurement Laboratory after having served four years as PML's Deputy Director. Prior to his appointment to PML, Dr. Olthoff served as Deputy Laboratory Director of NIST's Electronics and Electrical Engineering Laboratory (2007-2010), Division Chief of the Quantum Electrical Metrology Division (2003-2007), Division Chief of the Electricity Division (2000-2003), and in several supervisory and research positions.

Dr. Olthoff received his undergraduate degrees in physics and mathematics from Calvin College in 1980, and his Ph.D. in physics from the University of Maryland in 1985 in atomic, molecular and optical physics. He then held a two-year appointment at the Johns Hopkins School of Medicine before arriving at NIST. During his research career, Dr. Olthoff authored or co-authored more than 120 publications and co-authored or edited four books.

In his role in leading the U.S. measurement infrastructure, Dr. Olthoff has filled high-profile positions representing NIST and the United States within the international metrology community. Currently, Dr. Olthoff is one of the vice-presidents of the International Committee on Weights and Measures (CIPM) which oversees the International System (SI) of Units. Dr. Olthoff's previous international metrology responsibilities include serving as the Chair of the Sistema Interamericano de Metrologia (SIM) Quality System Task Force (QSTF), representing SIM on the Joint Committee of the Regional Metrology Organizations (JCRB), serving as the Chair of the Conference on Precision Electromagnetic Measurements, representing NIST on the CIPM Consultative Committee on Electricity and Magnetism, and representing the U.S. on the SIM Council and SIM General Assembly. Dr. Olthoff also served as the President of the Board of the NCSL International, the U.S. representative to IMEKO, and the SIM Technical Committee Chair.