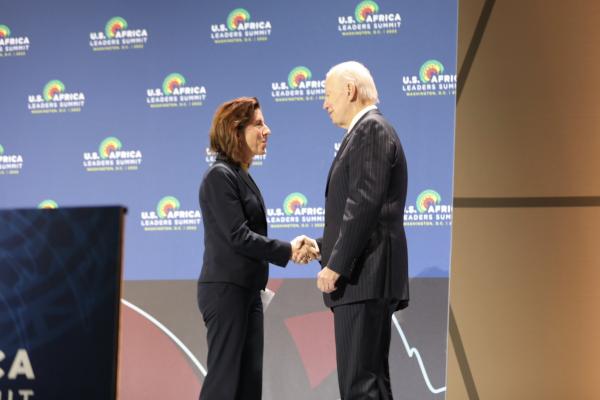 On December 15, Commerce Secretary Gina Raimondo addressed the 2022 U.S.-Africa Business Forum and echoed President Biden’s ongoing commitment to deepening business ties and advancing two-way trade investments between the U.S. and Africa. Later in the day, she joined the President as he announced $15 billion in two-way trade and investment commitments, deals, and partnerships.

“President Biden has taken unprecedented steps to ramp up U.S. government engagement with American business in support of Africa’s transformation, “said Raimondo. “At the Commerce Department, we are raising our game to grow U.S. business engagement in Africa.” During her remarks to leaders from the U.S. and Africa, she stressed that the future U.S.-Africa partnership will be shaped by commercial ties between businesses on both sides of the continent, including women, next generation, and Diaspora entrepreneurs. She also noted the steps Commerce is taking to grow U.S. business engagement in Africa, including enhancing technical cooperation to strengthen the commercial enabling environment in partner countries; elevating bilateral MOUs, trade missions, and commercial advocacy; and working across the government to de-risk private investment in key sectors.

“I believe we are at a tipping point in our commercial relationship, and it is time we move beyond aid to investment,” said Secretary Raimondo. “There is immense potential for what we can do together. The next generation of Africans and Americans deserve nothing less.”

U.S. Commerce Secretary Gina Raimondo also announced she will lead a trade mission to Africa with leading American companies and investors in 2023. The mission will underscore the President’s commitment to increasing investment, innovation, and entrepreneurship across Africa.

Later that day, the Secretary introduced President Biden before his remarks where he announced $15 billion in new deals and the launch of the Digital Transformation with Africa initiative which aims to expand digital access and literacy across the continent. The President also announced an initiative to help boost U.S. investment by protecting Africa from cyber threats as well as the implementation of the African Continental Free Trade Area that will represent one of the largest free trade areas in the world. Throughout the week, Secretary Raimondo also participated in several bilateral meetings with President Samia Suluhu Hassan of the United Republic of Tanzania, Prime Minister Patrick Achi of Côte d’Ivoire, Macky Sall, President of the Republic of Senegal and Chairperson of the African Union, and Prime Minister Aymen Benabderrahmane of Algeria. During her meetings, she discussed opportunities to work together to create an enabling environment for increased trade and investment.

Commerce Deputy Secretary Don Graves also participated in various events throughout the week aimed at identifying and expanding opportunities for closer cooperation between the U.S. and countries across the African continent. In particular, he helped lead the U.S. Africa Space Forum, which highlighted how outer space can be a catalyst to advance shared U.S.-Africa goals on Earth. The Deputy Secretary also held several bilateral meetings with African leaders from the Democratic Republic of the Congo (DRC), Zambia, Kenya, and Cote d’Ivoire. Earlier this year, the Deputy Secretary visited Côte d’Ivoire and Ghana where he participated in key commercial forums to drive investment and create opportunities for U.S. businesses across Africa.

“Overall, the conversations this week weren’t the culmination of our efforts, but rather, the end of just the beginning,” said Graves. “This is about building a much stronger relationship with African countries, and with African people, from here moving forward.” Hosted by the U.S. Department of Commerce, the U.S. Chamber of Commerce, the Corporate Council on Africa, in partnership with the Prosper Africa Initiative, the U.S.-Africa Business Forum was focused on advancing two-way trade and investment partnerships that bolster Africa’s role in the global economy, scale innovation and entrepreneurship, and drive advancements in key sectors. The business forum was part of this week’s U.S.-Africa Leaders’ Summit held from December 13—15.