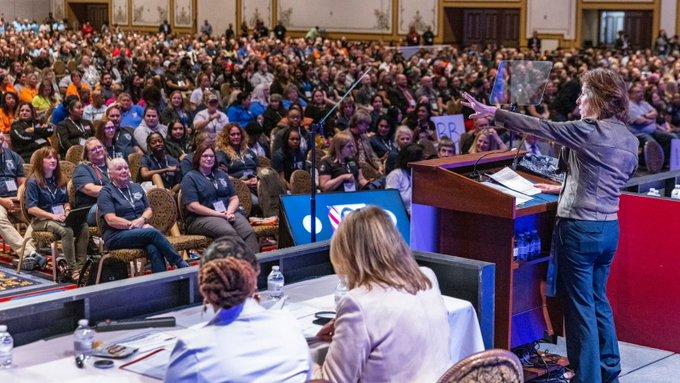 U.S. Secretary of Commerce Gina Raimondo traveled to Las Vegas where she announced the Million Women in Construction initiative that aims to build a new inclusive American workforce by bringing more women into the construction industry. The announcement was made on October 29th during the Secretary’s keynote remarks at the North American Building Trades Union (NABTU) Tradeswomen Build Nations 2022 Conference.

“Right now, there are about one million women working in the construction industry,” said Secretary Raimondo. “I’m here to tell you that together we are going to double that over the next decade to create opportunity for another million women.”

As part of the Biden Administration’s Bipartisan Infrastructure Law and CHIPS and Science Act, the Department of Commerce is investing more than $100 billion to boost domestic semiconductor manufacturing and bring high-speed internet to every American. These projects are expected to create up to 200,000 construction jobs. However, there are currently not enough trained tradespeople to meet the demand. And while women account for more than half of the U.S. population, they make up less than 10 percent of jobs in the trades. “There's no way the Department of Commerce is investing billions of taxpayer dollars in brand new infrastructure projects and not having those jobs go to people who look like all of America,” said Secretary Raimondo.

Jobs in the trades such as ironworkers, plumbers and carpenters pay—on average—twice as much as minimum wage jobs like hospitality or care work or retail. They are some of the highest-paying jobs available to those without a college degree. However, women in the trades often lack the training, equipment, and opportunities they need to prove themselves on the job.

During her keynote remarks to thousands of tradeswomen, Secretary Raimondo relayed some of the stories she has heard during her recent visits to meet with women in the construction industry across the country. The women shared stories of the obstacles they’ve faced breaking into a male-dominated trade, including lack of women’s restrooms at job sites and using construction equipment like harnesses and hats that are made for men. They also spoke about being assigned fewer hours than the men and the lack of onsite childcare. “It’s 2022 – it’s time to say this is no longer acceptable,” said Raimondo. “Women don’t want to deal with the BS. They just want to do their jobs. Together, we’re going to put the pedal to the metal and bring more women into the construction industry than ever before.”

Moving forward, the Million Women in Construction initiative will be a top priority for Secretary Raimondo. The Department of Commerce will work across the Biden Administration to ensure everyone will benefit – workers, women, people of color, unions, contractors, businesses, and America as a whole.

The Department of Commerce’s mission is to create the conditions for economic growth and opportunity for all communities. Essential to that mission is the need to build sustainable, employer-driven career pathways to meet employers’ need for talent and to connect Americans to quality jobs. Click here for more information.