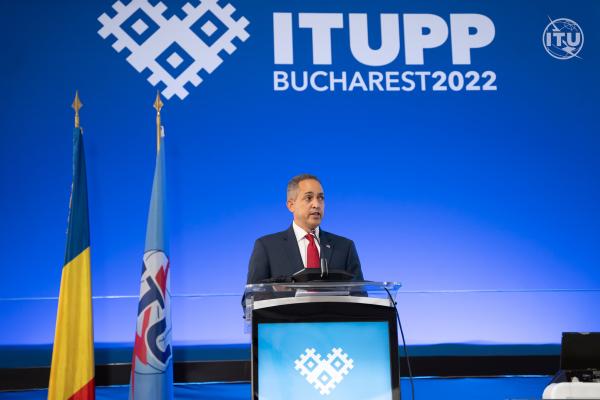 From September 25—29, 2022 U.S. Deputy Secretary of Commerce Don Graves traveled to Bucharest, Romania to serve as the Senior U.S. Representative on the high-level U.S. delegation to the International Telecommunication Union (ITU) 2022 Plenipotentiary Conference.  In the official U.S. policy statement to over 3,000 delegates from over 180 countries, Graves stressed the U.S. Government’s commitment to working with the international community on closing the digital divide. He also met with ministers and regulators to successfully gain support for Doreen Bogdan-Martin as the next ITU Secretary-General.

During his remarks at the ITU, Deputy Secretary Graves also announced plans for the United States. to increase their contribution rate to the ITU and additional U.S. resources to the Partner2Connect Digital Coalition (P2C) to assist people around the world that need internet connectivity the most.  The United States will remain among the very top contributors to the UN specialized agency.

The P2C is a new coalition of UN agencies, governments, and the private sector launched by the ITU to foster meaningful connectivity and digital transformation globally, with a focus on hardest-to-connect communities.

“P2C is not just an extraordinary achievement for an international organization – it shows us what can be accomplished when we come together to tackle global problems,” said Graves.

In addition, Graves' remarks stressed the need to close the worldwide digital divide.

“We are committed to working with the international community to achieve universal affordable connectivity; to close digital divides—including the gender digital divide—and to equip people with digital skills,” said Deputy Secretary Graves. “We must continue to work together to connect the unconnected.”

The Plenipotentiary Conference is the ITU’s largest decision-making conference convening hundreds of senior and Minister-level foreign government officials, technical experts, private sector, and NGO representatives. Graves was the senior-most official of the U.S. Government attending the conference.  Participants are focusing on resolving connectivity issues, supporting advancements in telecommunications and ICT technologies, their applications, and promoting the digital skills needed to use them in all countries and communities of need.

During his time in Romania, Deputy Secretary Graves also engaged with ITU members and leaders representing over 20 countries to confirm and gain support for Doreen Bogdan-Martin as ITU Secretary-General and stress the United States’ commitment to increasing economic and commercial relationships.

During his bilateral meeting with Romania, Graves also discussed Russia’s invasion of Ukraine including American business and government response, the war’s impact on Romania’s role as a regional leader, and resultant vulnerabilities in energy security. “Doreen is the right person at the right time to lead the ITU,” said Graves. “She will work hard to bridge the digital divide to connect the 2.7 billion people globally who do not have access to the Internet.”

Deputy Secretary Graves also met with the outgoing ITU Secretary-General Houlin and thanked him for the great changes the telecommunications sector has seen over the last 24 years during Mr. Zhao’s tenure. To conclude his trip, Deputy Secretary Graves participated in the AmCham U.S.-Romania Economic Celebration of 25 years of Strategic Partnership. During his remarks, Deputy Secretary Graves praised Romania for their commitment to strengthening the U.S. Romania Strategic Partnership and furthering the U.S.-Romania economic relationship. Graves also highlighted some of the many successes between the U.S. and Romania on critical areas such as defense, nuclear energy, climate change, ICT communications, women’s economic empowerment, and on Russia’s military attacks on Ukraine. Graves also commended Romania for pushing back on Chinese influence in critical security sectors such as telecommunications infrastructure, the civil nuclear sector, and in its own state procurements.

“Over the past 25 years, the primary focus of the Strategic Partnership has been national security and defense,” said Graves. “I believe that we can tackle the range of 21st-century global threats and regional conflicts while strengthening our commercial relationship and supporting workers and businesses in both of our countries.”