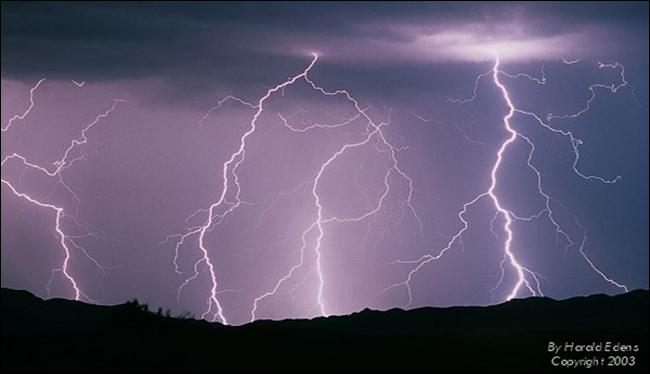 A lightning-filled sky  is a common sign of summer in many parts of the United States. Lightning is a giant spark of electricity in the atmosphere between clouds, the air, or the ground. It is often accompanied by thunder– the booming sound wave associated with a lightning strike.

Lightning strikes the U. S. about 25 million times each year.  Typically, Southeastern and Gulf coast states experience more lightning than other areas of the country, with Florida usually having the highest annual frequency of lightning strikes. Lightning is a significant weather hazard that you should always take seriously. Although the odds of being struck by lightning within your lifetime amount to about one in 15,300, lightning strikes kill about 20 people each year in the United States, and injure hundreds more. While almost 90% of all lightning strike victims survive, significant health impacts such as cardiac arrest, thermal burns, loss of consciousness, temporary hearing loss, and breathing problems can result. Long-term side effects can include spinal cord weakness, difficulty concentrating, muscle weakness, and sensory loss.

There are several steps you can take to avoid the dangers associated with lightning.

Remember: “When thunder roars, go indoors.” If you can hear thunder, lightning is usually close by. Too many people wait far too long to get to a safe place when thunderstorms approach. The safest thing you can do during a thunderstorm is quickly find shelter inside when you first hear thunder and remain indoors for 30 minutes after the last sounds of thunder.

Learn more about how you can keep safe from lightning with these resources from NOAA.