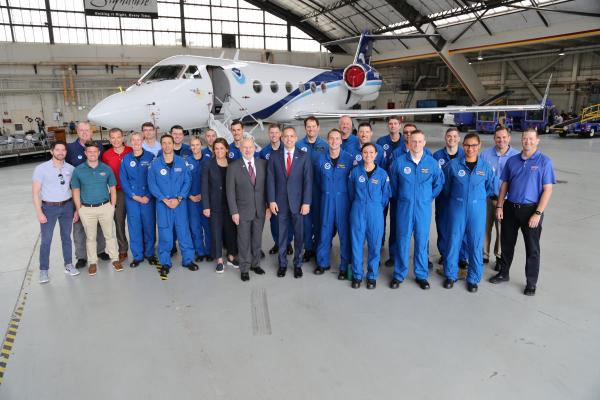 As the Nation gears up for another hurricane season in both the Atlantic and Pacific basins, U.S. Deputy Secretary of Commerce Don Graves addressed the impacts that hurricanes have on the U.S. economy and the need to combat the climate crisis at the National Oceanic and Atmospheric Administration’s (NOAA) and U.S. Air Force Reserve’s (USAFR) Hurricane Awareness Tour at Reagan National Airport. The event is part of NOAA’s hurricane hazard education campaign and National Hurricane Preparedness Week.

“As the nation gears up for another hurricane season, it’s important that all Americans living in the potential paths of these storms, even well inland of the coast, follow NOAA’s guidance for preparation,” said Graves. “Determine your risk, develop an evacuation plan, and assemble the disaster supplies that you may need if a disaster strikes.” “Severe weather events, especially hurricanes, have a significant economic impact on our country and around the world,” said Graves. “Four of the 20 weather and climate related billion-dollar disasters that impacted our country in 2021 were directly caused by hurricane impacts.”

In 2021, four out of the 20 weather and climate-related billion-dollar disasters that impacted our country were directly caused by Hurricane impacts (Hurricane Ida, Hurricane Nicholas, Tropical Storm Fred, and Tropical Storm Elsa). In fact, the 2021 Atlantic hurricane season produced 21 named storms, including seven hurricanes, of which four were major hurricanes (Category Three or higher). It was the third most active year on record in terms of named storms, marking the sixth consecutive above-normal Atlantic hurricane season, and the first time on record that two consecutive hurricane seasons exhausted the list of 21 storm names.

Deputy Secretary Graves also stressed the need to combat the climate crisis noting it is a top priority for the Commerce Department, as well as the entire Biden Administration.

“Just last month, Secretary Raimondo signed a new order that directs the department to prioritize climate considerations in all of our work,” said Graves. “And with NOAA leading the way, the Commerce Department has been using every tool at our disposal to address this crisis and related economic impacts.”

The Central North Pacific hurricane season runs from June 1 through November 30. Being prepared means having your own food, water and other supplies to last for several days. Stay informed at @NHC_Atlantic or at  https://www.noaa.gov/hurricane-prep