Women You Can Count On: A Look Back at a Trailblazer in Demographic Research 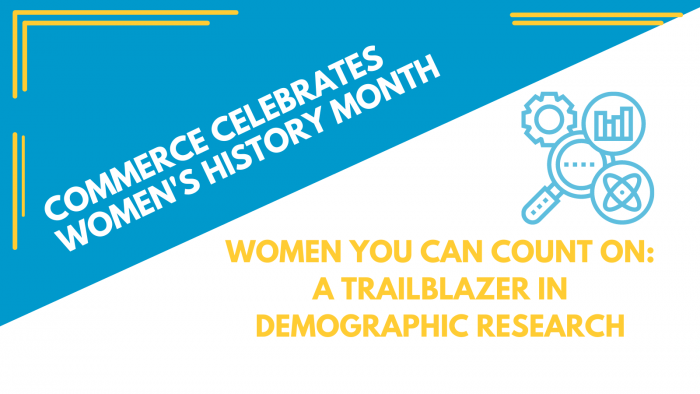 Women have long been a key contributor to the collection of data that is so critical to measuring the pulse of our nation. Census data reflect the growth of the population as well as the changing values and interests of the American people.

In honor of Women’s History Month, the Commerce Department’s U.S. Census Bureau has featured one such woman who was a pioneer in demographic research and left a significant imprint on the field of demography at several universities and federal agencies she worked at during her 42-year career.

U.S. Census Bureau has always been ahead of the curve when it comes to employing women. It began hiring women in 1880, when it started using professional enumerators instead of U.S. marshals.  By 1909, a decade before the 19th Amendment granted women the right to vote, over 50% of the Census Bureau’s 624 permanent employees were women. By 1920, the Census Bureau would once again push forward, appointing its first five female supervisors and three division chiefs. Irene Barnes (later Irene Barnes Taeuber through marriage) was born on Christmas Day 1906, in Meadville, Missouri. She earned a bachelor’s degree at the University of Missouri (1927), a master’s degree in anthropology at Northwestern University (1928), and a Ph.D. in sociology at the University of Minnesota in 1931. It was here that she met and married fellow graduate student Conrad Taeuber in 1929. After graduation, Irene and Conrad moved to Massachusetts and taught at Mt. Holyoke for three years before moving to Washington, D.C., where she worked as contributing author for the journal Population Literature of the Population Association of America. In 1935, she joined Princeton University’s Office of Population Research, where she started as a part-time research associate and editor at the Population Index, the successor journal to the Population Literature. Irene served in this position for 17 years before being promoted to a senior research demographer in 1961.

Throughout her career, Irene also worked as a researcher for various academic and government agencies. Among them: the U.S. Census Bureau, where from 1941-1944, she directed the Census Library Project, a joint venture between Congress and the Census Bureau designed to create “a single depository library of all population census and statistical publications…” for students, academics and policymakers interested in learning more about the U.S. population. Seeking to address the U.S. government’s immediate need for detailed demographic and statistical information, Irene supervised the compilation of materials that would become the General Censuses and Vital Statistics in the Americas. Published in 1943, the General Censuses and Vital Statistics and other special reports provided U.S. government officials and military leaders key insights for fighting a world war and planning an international reconstruction effort.

After World War II, Irene continued working as a research demographer for the Office of Population Research, a government consultant and noted author. Throughout her career, she authored or co-authored a dozen books and some 250 articles and chapters. Among these publications: two monographs for the U.S. Census Bureau, entitled The Changing Population of the United States (1958) and People of the United States in the Twentieth Century (1972). These monographs analyzed the results of the 1950 and 1960 Censuses.  Her most famous publication was a book entitled, The Population of Japan (1958), which provided a detailed description of Japan’s evolving society post-World War II using censuses, vital statistics, and other demographic evidence to bolster her observations. The book was so well-received in Japan that the Mainichi Press published a Japanese version 10 years after it was first published in the United States.

Irene left a significant imprint on the field of demography and each university and federal agency she worked at during her 42-year career. She retired from her position as senior demographer at the Office of Population Research in 1973 and was working on a book about China (aimed at mirroring the scope of The Population of Japan) but died on February 24, 1974, at the age of 67, before completing it. She is survived by two sons, Richard and Karl (both demographers), five grandchildren and several great-grandchildren.

The U.S. Census Bureau's mission is to serve as the nation’s leading provider of quality data about its people and economy is proud of Irene’s pioneering work in demography and her career as a selfless civil servant.