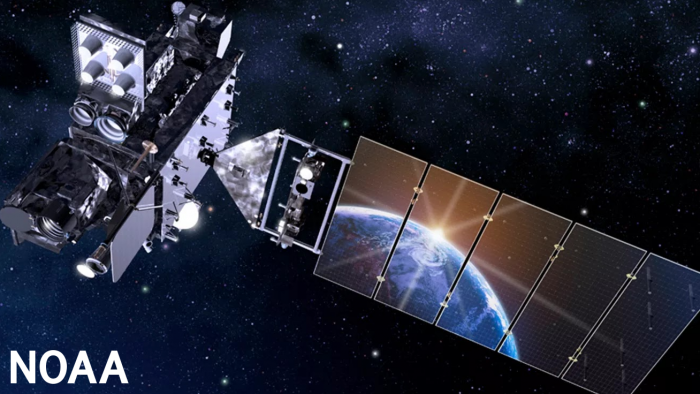 NOAA’s GOES-T, the third in a series of four advanced geostationary weather satellites, blasted into orbit aboard a United Launch Alliance Atlas V 541 rocket at 4:38 p.m. ET on March 1, 2022 from Cape Canaveral, Florida. GOES-T’s mission managers confirmed that its solar arrays successfully deployed at 8:28 p.m. EST, and the satellite was operating on its own power.

Once GOES-T is positioned in a geostationary orbit 22,300 miles above the Earth, after approximately two weeks, it will be renamed GOES-18. After undergoing a full checkout and validating its six high-tech instruments, the new satellite will move to the GOES-West position and replace GOES-17 in early 2023.

From there, it will constantly provide advanced imagery and atmospheric measurements. Observations from GOES-18 will be fed into the NOAA's National Weather Service’s computer models used by meteorologists to develop forecasts and help predict the formation, growth, intensity and movement of hazardous weather systems.

Additionally, the GOES-18 lightning mapper’s robust and continuous data over the ocean and in mountainous and rural areas not covered by radar will assist in making tropical, aviation and marine forecasts. The lightning data can alert us to the potential ignition of a wildfire and its imager will help pinpoint the initial location of a wildfire — crucial for emergency response teams fighting the fires and initiating evacuations. GOES-18 will also help forecasters track and predict the formation and dissipation of fog, which can disrupt airport operations.

GOES-18 will work in tandem with GOES-16, the first satellite in NOAA’s new geostationary series, in the GOES-East position. Together, the satellites will observe more than half the globe — from the west coast of Africa to New Zealand and from Alaska to Antarctica.

"NOAA’s geostationary satellite system provides the only continuous coverage of the Western Hemisphere, enabling forecasters to issue warnings to protect the lives and property of the one billion people, who live and work in the Americas,” said Steve Volz, Ph.D., acting assistant secretary for environmental observation and prediction and the assistant administrator of NOAA’s Satellite and Information Service.

NOAA oversees the GOES-R Series Program through an integrated NOAA-NASA office, manages the ground system, operates the satellites and distributes their data to users worldwide. NASA’s Goddard Space Flight Center oversees the acquisition of the GOES-R spacecraft and instruments, and built the Magnetometer for GOES-T and the future GOES-U. Launch management is provided by NASA’s Launch Services Program based at the agency’s Kennedy Space Center. Lockheed Martin designs, builds, and tests the GOES-R series satellites. L3Harris Technologies provides the main instrument payload, the Advanced Baseline Imager, along with the ground system, which includes the antenna system for data reception.

Looking forward, NOAA is working with NASA on the next-generation geostationary satellite mission called GeoXO, which will bring new capabilities in support of U.S. weather, ocean and climate operations in the 2030s. NASA will manage the development of the GeoXO satellites and launch them for NOAA.