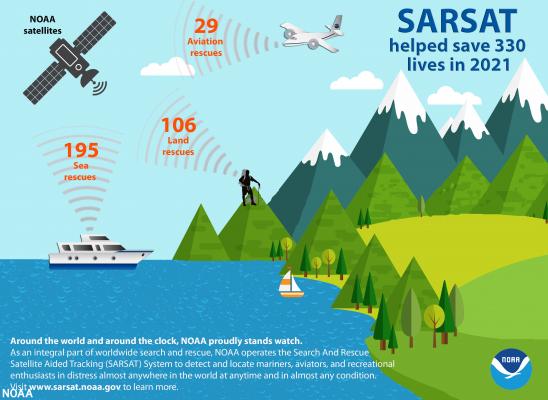 NOAA’s fleet of advanced satellites are essential for predicting weather and climate, and last year they also helped rescue 330 people from potentially life-threatening situations throughout the United States and its surrounding waters.

Of the 330 U.S. rescues, 195 were water rescues, 29 were from aviation incidents and 106 were from events on land. Alaska had the most SARSAT rescues with 55, followed by Florida with 52 and California with 37.

NOAA’s polar-orbiting and geostationary satellites are part of the global Search and Rescue Satellite Aided Tracking system, or COSPAS-SARSAT, which uses a network of U.S. and international spacecraft to detect and locate distress signals sent from emergency beacons from aircraft, boats and handheld Personal Locator Beacons (PLBs) anywhere in the world. Since its start in 1982, COSPAS-SARSAT has been credited with supporting more than 48,000 rescues worldwide, including more than 9,700 in the United States and its surrounding waters.

When a NOAA satellite pinpoints the location of a distress signal in the U.S., the information is relayed to the SARSAT Mission Control Center at NOAA’s Satellite Operations Facility in Suitland, Maryland. From there, the information is sent quickly to Rescue Coordination Centers, operated either by the U.S. Air Force for land rescues, or the U.S. Coast Guard for water rescues. NOAA also supports rescues globally by relaying distress signal information to international SARSAT partners.

Among the success stories last year, a miner was rescued from a 20-foot shaft about 30 miles northwest of Phoenix, Arizona, in the Bradshaw Mountains. The Air Force Rescue Coordination Center received the alert from the PLB and contacted the owner, who provided the details of the distress. The Yavapai County Sheriff’s Office deployed a helicopter and emergency medical units to the scene. Rescuers pulled the miner from the shaft and transported him to a Phoenix hospital for treatment of multiple injuries.

“Each rescue shows the SARSAT system works as planned," said Steve Volz, Ph.D., assistant NOAA administrator for its Satellite and Information Service. "Its life-saving ability is built on four decades of teamwork with the U.S. Coast Guard, the U.S. Air Force, NASA and our international partners.”

By law, beacon owners are required to register their devices online with NOAA. The registration information helps provide better and faster assistance to people in distress, and reduces false alarms. It may also provide what type of help is needed.