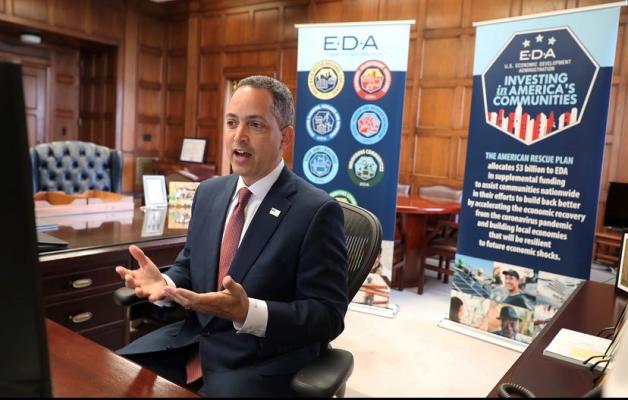 This Black History Month, I have been reflecting on the words equity and opportunity, and the work that we at the U.S. Department of Commerce are doing to live up to their definitions and ensure that we create a 21st century economy that works for all Americans, but especially those who far too often have been overlooked or left behind. I come from a long line of small business owners, including one who owned and operated the only African American-owned hotel in the mid-to-late 1800s, a few short blocks from where the Commerce Building sits today. During this time in our country’s history, it was almost impossible to imagine that a Black man, the son of slaves, could achieve the American Dream.

At Commerce, we are actively working to help communities build back equitably so that no one gets left behind and to ensure that more Americans, particularly Black Americans, can achieve the American Dream and have access to opportunities like those afforded to my family.

In pursuit of those goals, last year we hosted the first-ever Interagency Convening on Equitable Economic Growth with public, private, philanthropic, nonprofit, and community leaders committed to designing an economic growth strategy that is inclusive for all Americans. Leaders across industries gathered to share ideas and develop solutions to close the racial wealth gap. These vital conversations were centered around creating actions and solutions that can be implemented across the industry to build an economy where every American worker, business, and community can thrive.

This is especially important as our economy becomes more digital.

During the 19th century, the Rural Electrification Act brought an essential utility to millions of Americans and allowed them to fully participate in the modern economy. In the 21st century, access to high-speed internet is as essential electricity, and we must ensure that every single American, including those living in underserved communities, are able to access the internet and participate in our modern economy. Unfortunately, Americans who lack broadband access are being excluded from opportunities to fully participate in the modern digital economy, and that is unacceptable.

Estimates show that 30 million Americans lack reliable or affordable broadband – disproportionately those who are non-white and low-income. The National Telecommunications and Information Administration (NTIA) has been working actively to address this injustice through programs such as the Connecting Minority Communities Pilot Program. And thanks to President Biden’s Bipartisan Infrastructure Law, we will be able to build upon these critical investments. This landmark legislation provides $65 billion dollars to expand broadband in our country, with $48 billion dollars coming to the Commerce Department and NTIA to close the digital divide across America once and for all. The law also provides billions of dollars aimed directly at promoting digital equity.

Although there’s still more work to be done, this administration is beyond prepared to do that work.

Since day one, the Biden-Harris Administration has placed equity at the forefront. In his very first week in office, President Biden signed a historic executive order to make racial equity the business of the entire federal government. Additionally, through the American Rescue Plan (ARP) the Commerce Department’s Economic Development Administration (EDA) was given $3 billion to help struggling communities, which included $1 for EDA’s Build Back Better Regional Challenge and $500 million for the Good Jobs Challenge. These transformative programs are aimed at helping distressed communities recover from the COVID-19 pandemic with a focus on women, people of color, and underserved communities.

Moreover, the American Rescue Plan has expanded access to wealth creation through small business ownership in Black communities, and President Biden has directed agencies to use federal contracting authority to increase its procurement from small, disadvantaged businesses, including Black-owned businesses, by 50% by 2025. This translates to an additional $100 billion over five years and leveraging the purchasing power of the federal government to help narrow the racial wealth gap.

Fortunately, the Commerce Department is uniquely positioned to help recovering minority businesses, which will be even more important considering that “the number of African-American business owners in operation surged to almost 1.5 million…up 38% from February 2020,” according to recent research.

The Bipartisan Infrastructure Law also included statutory authority to make the Minority Business Development Agency (MBDA) permanent. MBDA is the only agency within the federal government that is focused on supporting the long-term health and wellbeing of minority-owned businesses. Our programs at MBDA are already producing results, having helped minority-owned businesses secure more than $2 billion in contracts, $708 million in financing, and supported the creation and retention of nearly 14,000 jobs. At Commerce, we are committed to keeping up this momentum with the new authority granted to MBDA and will continue our work to create a more equitable economy that gives every American a chance to succeed.

The U.S. Department of Commerce will use every tool at its disposal to help create high-quality, family sustaining jobs; opportunities to build skills and advance careers; and, along with the entire administration, will bring the full weight of our resources of the federal government to ensure that all Americans can participate in the 21st-century economy. It is not only the right thing to do but will make our American businesses and workers more competitive here at home and on the world stage.