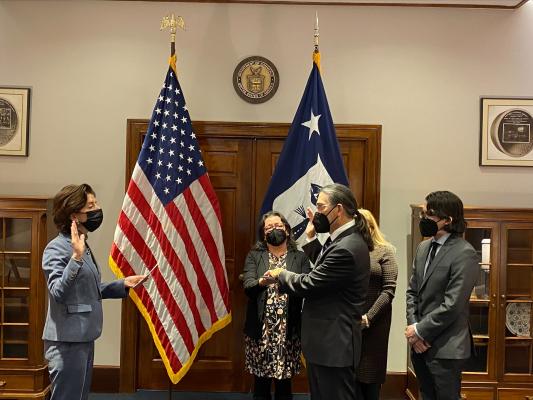 Robert Santos was sworn in today as the U.S. Census Bureau’s 26th director, becoming the first Latino person to serve in the role. This appointment follows the U.S. Senate confirmation Nov. 4, 2021, with Santos’ term set to last for five years.

“Mr. Santos is a tremendous leader and I have full confidence that he will lead the Census Bureau with integrity in the years ahead,” said Secretary of Commerce Gina M. Raimondo. “The Census Bureau is an invaluable asset to our government and the American people, providing essential data for businesses, government leaders and policymakers to make informed decisions. I look forward to working with Mr. Santos and congratulate him on his appointment.”

“I’m deeply honored and humbled to lead the federal government’s largest statistical agency,” Santos said. “I’ve spent the majority of my career with organizations dedicated to delivering credible and informative statistical analysis for the public good. Census Bureau data have been essential to that work. It is such an immense privilege to join the Census Bureau and its very talented team.”

Santos previously served for 15 years as vice president and chief methodologist at the Urban Institute and directed its Statistical Methods Group. He was executive vice president and partner of NuStats, a social science research firm in Austin, Texas.

Santos has held leadership positions in the nation’s top survey research organizations, including the National Opinion Research Center (NORC) at the University of Chicago, where he served as vice president of statistics and methodology and director of survey operations; the Institute for Social Research at the University of Michigan, as director of survey operations; and Temple University’s Institute for Survey Research, as senior study director and sampling statistician.

Additionally, Santos served as the 2021 president of the American Statistical Association (ASA) and is an ASA Fellow and recipient of the ASA Founder’s Award in 2006. He was the 2014 president of the American Association for Public Opinion Research (AAPOR) and received the 2021 AAPOR Award for Exceptionally Distinguished Achievement. Santos is also an elected member to the International Statistical Institute, and he served from 2017 to 2020 as a member of the Board of Scientific Counselors for the National Center for Health Statistics at the Centers for Disease Control and Prevention. He was a longtime member of the editorial board of Public Opinion Quarterly.

Please click here to view this announcement in Spanish.