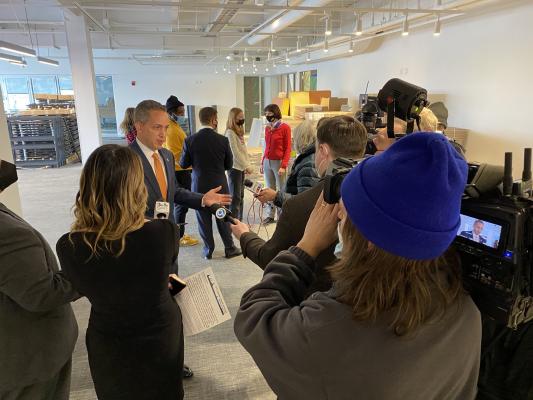 Today, U.S. Deputy Secretary of Commerce Don Graves and Majority Leader Senator Chuck Schumer spent the day in Albany and Syracuse, New York, to highlight the importance of domestic semiconductor manufacturing in the United States and the need to pass the U.S. Industries and Competition Act (USICA).

On their trip, Deputy Secretary Graves and Leader Schumer toured technology facilities and potential sites for semiconductor production. They also met with local business leaders and elected officials to discuss the importance of the Bipartisan Infrastructure Law and the Build Back Better Regional Challenge in creating good-paying jobs and economic opportunities for the region.

“The reason the Commerce Department is so committed to making our supply chains more resilient and revitalizing American manufacturing, is because we know that in too many areas, our country has fallen behind the rest of the world due to complacency and chronic lack of investment,” said Deputy Secretary Graves. “If we are serious about increasing American competitiveness, protecting our economic security, and hitting President Biden’s electric vehicle goals, it is imperative that we reinvest in this critical industry as quickly as possible.”

Deputy Secretary Graves started his trip in Albany, New York, along with New York Governor Kathy Hochul and Leader Schumer, to tour a nanotechnology facility on the campus of the State University of New York Polytechnic Institute (SUNY). Albany’s nanotech facility emphasizes collaboration on nanotechnology and semiconductor research between businesses, government, and universities.

“Passing USICA will inject $52 billion into our economy for domestic semiconductor production, but every day that we do not pass this legislation, we continue to fall behind China and others on the world stage,” said Graves. “Nevertheless, I remain confident that Leader Schumer and his colleagues in Congress will deliver for the American people, as they did with the Bipartisan Infrastructure Law, and send a bill to the President’s desk swiftly.”

Following the Albany Nanotech tour, Deputy Secretary Graves and Leader Schumer met with officials at JMA Wireless, which is one of the very few, if only, U.S.-owned 5G manufacturers in the country. JMA brings high-paying American jobs in manufacturing to Syracuse and the capital region and guides the country’s global leadership in 5G and 6G.

“Leadership in 5G and 6G, is not only good for American businesses and workers, but it sets our country up to compete more effectively on the world stage,” said Graves. “However, JMA Wireless is a rare example of a U.S.-owned 5G manufacturing facility. USICA’s Wireless Innovation Fund would enable the United States to solidify our leadership in 5G and 6G, and support the transition to open and interoperable networks, an area where JMA and other American firms lead.”

Deputy Secretary Graves and Leader Schumer closed out their day with a roundtable discussion with Build Back Better Regional Challenge finalists and local leaders.

The group applauded the Commerce Department and Economic Development Administration’s (EDA) goals to rebuild American communities while addressing equity through the Build Back Better Regional Challenge (BBBRC). In December, the CenterState NY Smart Systems coalition won a $500,000 planning grant to develop plans for an unmanned aerial systems cluster in Central New York. With implementation funding, the coalition proposes to prioritize eight interconnected projects that will help create equitable economic growth in the region. If selected as the ultimate winner of the BBBRC, CenterState could be awarded up to $100 million to implement their project.

“It was so wonderful to engage with CenterState’s dedicated coalition and learn more about the work they are doing to develop the regional economy and create good-paying jobs in upstate New York,” noted Graves during Monday’s roundtable. “I want to again congratulate CenterState Corporation for Economic Opportunity for being selected as a Build Back Better Regional Challenge finalist, and let you know that the Department of Commerce stands ready to provide you with any technical assistance to continue to develop your plan and drive economic recovery and growth in your region.

The Department of Commerce notes that the Deputy Secretary is not a part of the competitive merit review process that will take place related to the BBBRC.