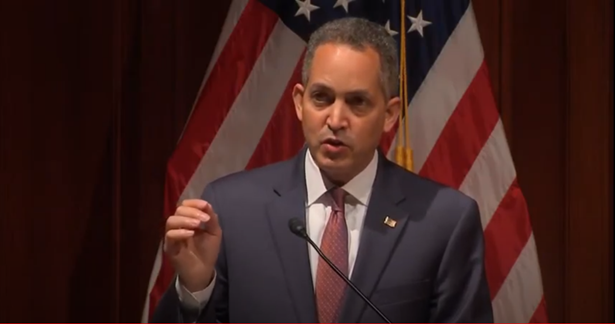 On November 9th, 2021, the Department of Commerce, in collaboration with the Ford Foundation; the U.S. Impact Investing Alliance; B Lab; Families and Workers Fund; and Ariel Investments, hosted the Biden-Harris administration’s first-ever Interagency Convening on Equitable Economic Growth. By bringing together key players from the government and private sector, speakers shared best practices, recent successes, and announced upcoming initiatives to advance economic equity for communities of color and underrepresented groups.

The Convening served as a forum where experts across agencies and sectors discussed key issues in building an inclusive economic recovery and solutions such as community investing, quality job creation, workforce training, supporting small businesses, diversity in corporate America, and leveraging data and disclosure for transparency and racial and gender equity.

“The fact that we’re all here together from so many different sectors is a testament to how unified we are on the importance of this issue to the future of the American economy.” Deputy Secretary Don Graves said.

Deputy Secretary Graves officially kicked off the event by introducing Gene Sperling, White House ARP Coordinator and Senior Advisor to President Biden, who began the program by discussing his work as director of the American Rescue Plan and the importance of equity in the implementation of economic policies. Following this, Gene Sperling introduced Secretary of Commerce Gina Raimondo. “Our economy cannot fully recover unless all Americans can fully participate, said Secretary Raimondo. “America's diversity is a competitive advantage - but only if we give everyone an opportunity to fulfill their potential and fully participate. At Commerce, we’re honored to play a leading role in helping our nation achieve that…Investing in equity for our people is the highest value investment we can possibly make. It’ll pay dividends for our future economic productivity, job creation, and all the things we need for a healthy, vibrant, competitive economy.” Secretary Gina Raimondo making remarks at the beginning of the Convening

Following the Secretary’s remarks, the Deputy Secretary held a fireside chat with John Rogers, founder, and CEO of Ariel Investments focused on diversity in business leadership, the progress made on economic inequality, and what needs to improve. “[The President] believes to his core that unless we unleash the human capital in this country, we as a country will never be able to compete with the rest of the world where that’s sort of a given.” Deputy Secretary Don Graves remarked. “It's incumbent upon us as a society to make sure that businesses aren’t failing simply because they don’t have access to capital”

Darren Walker, President of the Ford Foundation shared his call for “concerted, coordinated, and courageous” partnership between the government and private sectors. “We have an unprecedented opportunity to change how we do things. We must commit to making meaningful and robust investments in communities that have been denied access to the dividends of equitable economic growth,” he said. Darren Walker speaks at the Convening

The panel was immediately followed by another fireside chat with Ambassador Susan Rice, Domestic Policy Advisor for the White House, and Deputy Secretary of the Treasury Wally Adeyemo, who spoke on Ambassador Rice’s work advancing equity throughout the Biden Administration. Chair Gary Gensler of the U.S. Securities and Exchange Commission spoke about the Biden-Harris administration’s focus on promoting fairness and equity in their rules and enforcement and promoting equal access to all members of the public. Administrator Isabel Guzman of the U.S. Small Business Administration spoke of the historic investments the Biden-Harris administration has made in supporting small businesses and entrepreneurs in underserved communities. She also highlighted the positive impact that the Infrastructure Investment and Jobs Act will have on our communities. From left: Jeffrey Hirsch, President and CEO of Starz, and Deputy Secretary Graves during their conversation on equity in Hollywood

“The entertainment industry can play a big role in making strides towards more economic equity,” Deputy Secretary Don Graves said. “Telling a story helps people understand not only where they’ve been but the possibility.”

Private sector leaders also held a panel, led by Fran Seagull, President of the U.S. Impact Investing Alliance, on opportunities to partner with the government to catalyze equitable economic prosperity for workers, entrepreneurs, and communities.

Finally, the Deputy Secretary offered closing remarks and committed to reconvening every year with his partners in the public and private sectors.

“Hopefully you will leave today feeling inspired to take action. Think about it – what can YOU do? What is in YOUR power? I hope you harness your power – however big or small – and the power of your community to make a difference, based on the ideas you heard discussed here today,” Deputy Secretary Don Graves said. “Here is my commitment to you – I'm proud to say that we, the Deputy Secretaries here, will now hold this event annually. So please join us here next year and hold us accountable for what we’ve pledged.”

The following partners also made commitments to increase equity:

View the full agenda of the event or watch a replay of the entire convening.