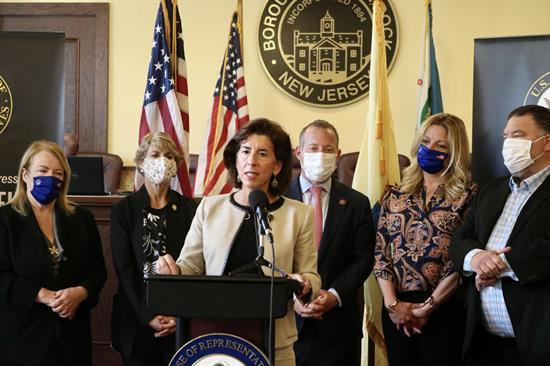 The following is a cross-post from U.S. Congressman Josh Gottheimer (NJ-5)

Congressman Gottheimer and Secretary Raimondo began their tour at Suka Jewelry’s flagship store in Glen Rock, which is woman- and minority-owned and features jewelry from local artisans that use ethically-sourced materials. Gottheimer and Raimondo also visited Merve’s Kitchen and Bakery, a popular Bergen County pastry shop that is also woman-owned, and Carrick Mor Irish Store, a six-year-old gift shop that specializes in artwork, apparel, and pottery sourced from Ireland. They concluded their tour of Glen Rock at the local favorite, John’s Boy Pizzeria, to grab a slice. Gottheimer and Raimondo spoke with each business owner about how the Bipartisan Infrastructure Bill will address major infrastructure needs within the North Jersey community — from repairing roads, bridges, rails, and tunnels, to investing in broadband, combating lead water, and fighting climate change.

“The Secretary, Mayor, and I spent this morning touring small businesses in downtown Glen Rock, just a stone’s throw from the train station, where moms and dads commute to work every day,” said Congressman Josh Gottheimer. “The message we heard was loud and clear: fixing our crumbling infrastructure — our roads, bridges, rails, and tunnels, and investing in broadband, and fighting climate change, like those recent floods, is key to their success, and to Jersey’s.”

"When President Biden came into office, he said he wanted to reach across the aisle and get things done for the American people. That's exactly what we've been doing since we got into office,” said U.S. Secretary of Commerce Gina Raimondo. “As Congressman Gottheimer has said, we have an opportunity right now to do something historic and pass a trillion dollar Bipartisan Infrastructure Bill that will create millions of jobs, ensure every single American has access to high quality, high-speed affordable broadband, and ensure that communities like yours here in Bergen County and Glen Rock have the funding necessary for transit and climate-resilient infrastructure. This infrastructure package is a huge step forward for America, and your Congressman, Congressman Gottheimer, has been a leader in that effort.”