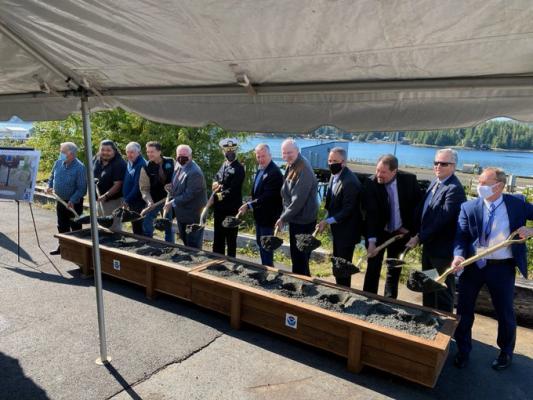 Joined NOAA’s Project to Revitalize “Salmon Capital of the World,” Urged Businesses to Get Their Employees Vaccinated and Stressed Need for Universal Broadband

U.S. Deputy Secretary of Commerce Don Graves traveled to Ketchikan and Juneau, Alaska, where he met with businesses and representatives from the local travel and tourism industry and outlined the Biden-Harris Administration’s efforts to assist in Alaska’s economic recovery, empower the Native Alaskan community, and expand broadband access and adoption across rural and Tribal lands. Deputy Secretary Graves also traveled to Seattle to reiterate the Administration’s commitment to building high-speed broadband infrastructure to reach 100 percent coverage through the Bipartisan Infrastructure Deal. The pandemic demonstrated the critical need for broadband for distance learning, access to telemedicine, and remote work.

Deputy Secretary Graves joined Alaska Governor Mike Dunleavy, U.S. Senator Dan Sullivan and other Federal, state, and local officials at a groundbreaking ceremony marking the start of a National Oceanic and Atmospheric Administration (NOAA) project to revitalize the agency’s port facility in Ketchikan, Alaska. Ketchikan, also known as the “Salmon Capital of the World,” is heavily reliant on commercial fishing. The construction of the port facility will not only create a dedicated homeport for NOAA’s ship, Fairweather, but will also enable NOAA to support safe navigation and commerce in Alaska and the region more effectively. “Building back better with climate-resilient infrastructure is what this NOAA facility revitalization project is all about,” said Deputy Secretary of Commerce Don Graves. “The investment we are making in partnership with the state of Alaska will help ensure that NOAA can continue to support safe navigation and commerce in Alaska efficiently and effectively for years to come.”

Each day, nearly every American relies on the data, products, and services that the Commerce Department provides through its bureau, NOAA. These include everything from daily weather forecasts and navigational tools to support the country’s nearly $4.6 trillion in economic activity generated by U.S. seaports, to assessments on the health of the nation’s $200 billion fisheries and disaster response. And NOAA tools are essential to enabling safe navigation, ensuring America's economic competitiveness, and protecting the environment.

Following the groundbreaking ceremony, Deputy Secretary Graves joined Senator Sullivan in hosting a roundtable discussion in Ketchikan with representatives from the local travel and tourism industry and addressed efforts to revitalize the Alaska economy in the wake of COVID-19. Deputy Secretary Graves at a roundtable discussion in Ketchikan with representatives from the local travel and tourism industry.

Graves also stressed the importance of getting vaccinated and emphasized the fact tourism in Alaska – and across the United States – has bounced back thanks in part to the Administration’s vaccination efforts. Fisheries and tourism are the backbone of the Alaskan economy. This summer, more people have visited Alaska’s National Parks and the first large cruise ship arrived in Ketchikan. Cruise lines bring more than half of Alaska's annual visitors.

“We have seen time and time again how getting vaccines in arms is key to economic recovery, and we encourage Alaska’s businesses to take measures to motivate employees to receive their COVID-19 vaccination,” said Deputy Secretary Graves.

Participants also shared their thoughts on what the Administration can do to accelerate the recovery and long-term growth of the travel and tourism sector. The following day, Deputy Secretary Graves held a similar roundtable with local businesses in Juneau. Deputy Secretary Graves at the recertification of Ketchikan as an official United States Coast Guard City.

Later that week, Deputy Secretary Graves traveled to Seattle and joined Representative Kim Schrier in a listening session with members of the local Service Employees International Union (SEIU) where they discussed workplace protections and equity in the labor force, as well as the need for a care infrastructure. Graves told participants that, “investing in our care economy is not only good for businesses; it is the right thing to do.”

Also with Representative Kim Schrier, Graves also participated in a broadband and education roundtable with at the Snoqualmie Library to discuss the need for students to have access to broadband. Graves and Schrier later toured the Snoqualmie Valley Hospital where they discussed the increasing and vital role of telemedicine and the need for affordable, high-speed broadband to expand access to care. The pandemic further revealed the increasing need for broadband as many more Americans used telemedicine to access healthcare. Deputy Secretary Graves and Representative Kim Schrier at a tour of the Snoqualmie Valley Hospital where they discussed the increasing and vital role of telemedicine.

At both roundtables, Deputy Secretary Graves stressed that the Biden Administration is committed to creating universal broadband access through a historic expansion of high-speed internet to every American through the Bipartisan Infrastructure Deal, which calls for an investment of $65 billion to make high-speed broadband available to all Americans, to bring down high-speed internet prices across the board, and to close the digital divide.

“Affordable broadband access is something all Americans need and deserve,” said Graves.” “Universal broadband access is critical for a thriving educational system and will allow American schools, businesses, and workers to compete in today’s global economy.” Deputy Secretary Graves also toured the Port of Seattle and the Terminal 5 project and hosted a roundtable with local trade and export representatives. He addressed how trade will be an important part of the global recovery from COVID-19 and explained how trade promotion is at the top of the Commerce priorities and plays a critical role in ensuring American competitiveness and economic growth. Deputy Secretary Graves at a tour of the Port of Seattle and the Terminal 5 project.

“Secretary Raimondo and I will bring a whole of Commerce approach focused on three priority areas to help businesses get back on their feet and so that millions of Americans can get back to work.”

The three areas include promoting equitable economic growth by eliminating barriers to trade, assisting the travel and tourism industry with funding allocated to Commerce’s Economic Development Administration through the American Rescue Plan, and creating a National Export Strategy to help American businesses reach customers in fast-growing markets abroad, to help generate the demand needed for job creation, and to position our economy for a strong recovery.