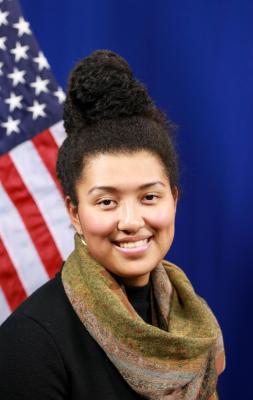 I am an International Trade Specialist and professional communicator in the Commerce Department’s International Trade Administration’s Enforcement and Compliance (E&C) unit. In this role, I help U.S. industries, media and the public understand the work we do to support a free, fair, and rules-based system of trade that protects American workers and businesses. Working in E&C’s communications office is extremely rewarding because I get a birds-eye-view of the entire business unit’s daily operations, and the great variety of work I do makes every day fresh and exciting.

I want to share my story of growing up Asian American with a twist. Born in Oregon, I was whisked away to China within the first two weeks, where I spent five years of my life before being towed around the world by my State Department parents. From a young age, I felt that I didn’t fit in. I am half-Chinese and half African American but being “Blasian” (Black and Asian) comes with its own unique set of experiences. At the market in China, vendors would call my Chinese mom a nanny, while pointing at me whispering “wai guo ren,” or “outsider.” In other countries, I was called an “American” while my more “Asian-looking” friends were called “Chino.” Even back in the states, people are not very quick to realize that I am Asian. At first, I struggled with feelings of belonging, but my life abroad has blessed me with a broader perspective as I absorbed cultures from around the world and met inspiring people from extremely diverse backgrounds. It taught me that although the brain is hardwired to depend on labels and biases, we need to question and challenge our subconscious, and sometimes override our preconceptions.

Despite struggling with the disconnect when I was younger, not “looking” Chinese has been a blessing that taught me that being Asian is all about what’s on the inside. Some of my favorite memories in Dalian include catching cicadas with my cousin on a hot  summer day, watching my nimble-fingered aunts pinch pillowy dumplings at New Years, and sitting on plastic stools in the street to eat a breakfast of deep-fried dough and soymilk. These all became formative experiences of what being Chinese means to me. The same memories later pushed me to learn even more. Right before graduating from high school in Mexico, I moved back to the U.S. just in time to experience one year of public school and, in 2014, I enrolled in the University of Oregon’s Chinese Flagship Program. The following year, I attended a summer language program hosted by Princeton, and later received the Boren scholarship to fund a full year of study and work abroad in China in 2016. After graduation, I was naturally drawn to public service because I watched how the government gives hardworking and kind people like my parents the opportunity to build relationships with people all over the world while also representing something bigger than themselves. To me, Asian American Pacific Islander month is all about recognizing how being Chinese plays a big role in my life and sharing my culture with others.

The lessons I’ve learned surrounding the Asian identity are especially prevalent right now. Recent high-profile race-based hate crimes have spurred much-needed conversations about the aggressions that minorities face on a daily basis. It hits even closer to home to know that even the older generation is targeted, and folks like my mom, uncles, and aunts, are being harassed based on their heritage. It is deeply saddening that fear and ignorance can be so damaging, when my global exposure has shown me firsthand the commonalities, we have between each other. None of us is going to solve racism in a day, but one first step that we can all take is to focus on changing ourselves and the people around us. The key takeaway is to take on the world with an open mind and ask the people who surround you to do the same. As for the young people out there, visibility is everything. Having diverse representation in the federal government is important because it gives minority groups the opportunity to amplify their voices and shape America into a country that is institutionally inclusive and fair for everyone.

Ed. note: This post is part of the Spotlight on Commerce series highlighting the contributions of Department of Commerce employees during Asian American and Pacific Islander Heritage Month