BEA is an independent, principal federal statistical agency that promotes a better understanding of the U.S. economy by providing timely, relevant, and accurate economic accounts data in an objective and cost-effective manner. Although a relatively small agency, BEA produces some of the most closely watched and influential economic indicators, such as gross domestic product (GDP) and the trade balance, that directly affect decisions made by policy makers, business leaders, and the American public.

BEA’s national, industry, regional, and international economic accounts present valuable information on U.S. economic growth, regional economic development, interindustry relationships, and the Nation's position in the world economy. Some of the widely used statistical measures produced by BEA include GDP, personal income and outlays, corporate profits, GDP by state and by metropolitan area, balance of payments, and GDP by industry. These statistics are used by federal, state, and local governments for budget development and projections; by the Federal Reserve for monetary policy; by the business sector for planning and investment; and by the American public to follow and understand the performance of the nation’s economy. 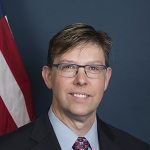 Director, Bureau of Economic Analysis, Performing the non-exclusive functions and duties of the Under Secretary for Economic Affairs

BEA Reports 17 of 22 Industry Groups Contributed to the 2.1 Percent Increase in Real GDP in 3rd Quarter.

Nondurable goods manufacturing; retail trade; and professional, scientific, and technical services were the leading contributors to the increase in U.S. economic growth in the third quarter of 2019, according to gross domestic product (GDP) by industry statistics released by the Bureau of Economic Analysis. Both private services- and goods-producing industries contributed to the increase; the...
Economic indicators

U.S. Economy Increases at a 2.1% Pace in the Third Quarter

Real gross domestic product (GDP) increased 2.1 percent in the third quarter of 2019, according to the “third” estimate released by the Bureau of Economic Analysis. The growth rate was unrevised from the “second” estimate released in November. In the second quarter, real GDP rose 2.0 percent. GDP highlights The third-quarter increase in real GDP reflected increases in consumer spending, government...
Economic indicators

This past year, the Commerce Department and its diverse bureaus and agencies were active in promoting job creation and economic growth, ensuring fair and reciprocal trade, leveling the playing field for American workers, and providing critical economic data to policymakers and the public. To close out the year, we have put together a list of our top blogs for 2019. This past year, our readers top...
2020 Census
Economic indicators
Export and investment promotion
Trade enforcement
Broadband
SelectUSA Investment Summit

Real gross domestic product (GDP) increased in 2,375 counties, decreased in 717, and was unchanged in 21 in 2018, according to estimates released today by the U.S. Bureau of Economic Analysis (BEA). The percentage change in real GDP ranged from 86.5 percent in Jackson County, WV, to -44.0 percent in Grant County, ND. GDP is the value of goods and services produced within a county. The size of a...
Economic indicators

BEA to Release First Official GDP Estimates for More than 3,000 Counties and 34 Industries

The size of every county’s economy with industry detail will be officially released for the first time by the U.S. Bureau of Economic Analysis on Dec. 12. BEA will estimate annual gross domestic product, or GDP, for the years 2001 through 2018 for more than 3,000 counties. The data will include contributions to GDP by 34 industries, such as manufacturing, retail trade, and health and social...
Economic indicators

The travel and tourism industry—as measured by the real output of goods and services sold directly to visitors—increased 4.2 percent in 2018, according to the most recent statistics from the Travel and Tourism Satellite Account (TTSA) published by the Bureau of Economic Analysis (BEA). This is an acceleration from the 2.3 percent growth in 2017. These new statistics show growth in the travel and...
Economic indicators
Travel and tourism

Press releases
Today, the Department of Commerce’s Bureau of Economic Analysis (BEA) released the third quarter GDP growth number for 2019. The Bureau found that real gross domestic product increased at an annual rate of 1.9 percent in the third quarter. “Today’s report shows that the U.S. economy continues its steady growth in defiance of media skeptics calling for a recession,” said Secretary of Commerce...
Economic indicators

Professional, scientific, and technical services; real estate and rental and leasing; and mining were the leading contributors to the increase in U.S. economic growth in the second quarter of 2019. The private goods‐ and services‐producing industries, as well as the government sector, contributed to the increase. Overall, 14 of 22 industry groups contributed to the 2.0 percent increase in real GDP...
Economic indicators
U.S. economy

The following is a cross-post from the Bureau of Economic Analysis (BEA) The U.S. outdoor recreation economy accounted for 2.2 percent ($427.2 billion) of current-dollar gross domestic product (GDP) in 2017 according to statistics released today by the Bureau of Economic Analysis. The Outdoor Recreation Satellite Account (ORSA) also shows that inflation-adjusted (real) GDP for the outdoor...
Economic indicators
Fisheries and aquaculture

The following is a cross-post from the Bureau of Economic Analysis (BEA) The U.S. current account deficit, which reflects the combined balances on trade in goods and services and income flows between U.S. residents and residents of other countries, narrowed by $8.0 billion, or 5.9 percent, to $128.2 billion in the second quarter of 2019. The narrowing mainly reflected an expanded surplus on...
Economic indicators
U.S. economy