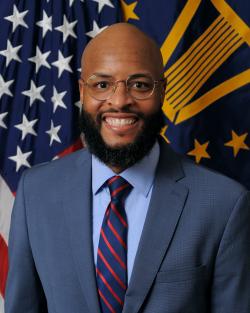 Mr. Jones brings more than 24 years of experience, which includes his service in the U.S. Navy and civilian experience that span four Federal Departments and Agencies. He is recognized for his extensive strategic planning, marketing and communications, financial, human capital, and technology resources. He brings over two decades of experience strengthening accountability, standardization, and program execution for small-to-large governmental organizations.

For his role overseeing the Joint Chiefs of Staff’s decision-support and policymaking processes, he led efforts to support the Chairman’s recommendations to the President and Secretary of Defense, the creation of the sixth military branch, the U.S. Space Force, the establishment of a new Geographic Combatant Command, and more than $300 million in cost savings under the Secretary of Defense’s Defense-Wide Review. For his efforts, Mr. Jones achieved the rare feat of being awarded the Chairman of the Joint Staff’s highest civilian honor, the Distinguish Civilian Service Award, an honor bestowed upon several national security leaders, including a Secretary of State.

The creation of the COO and Under Secretary positions coincide with the passages of the Infrastructure Investment and Jobs Act, which codified more than 50 years of MBDA supporting millions of minority-owned businesses.