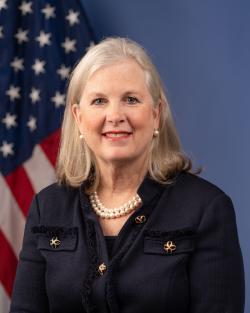 She most recently served as the Deputy Assistant Secretary for Asia, where she was the principal advisor to the Assistant Secretary for Global Markets on all matters concerning international economics, trade, investment, and commercial policy programs and agreements with respect to Asia. In this role, she also oversaw planning and execution of Commerce commercial diplomacy and export promotion strategies at United States Missions in Region Asia.

Prior to joining USIBC, Ms. Farrell served on the Board of Directors at the Export-Import Bank of the United States (U.S. Exim Bank). A Presidential appointee, confirmed by the U.S. Senate, she was responsible for voting on transactions in excess of $10 million as well as significant policy matters. Her portfolio responsibilities included small businesses, India, Southeast Asia, and portions of Latin America. In addition, she was named a member of the White House Business Council. During her tenure at U.S. Exim Bank, India transactions expanded and diversified as aircraft sales and conventional and green energy projects, among others, led to India becoming the second-largest country by U.S. dollar allocation in the bank’s overall portfolio.

Before serving at U.S. Exim Bank, Ms. Farrell was elected as the First Selectwoman in Westport, Connecticut. A strong mayor form of government, she managed multimillion-dollar budgets within the Consumer Price Index and maintained the town’s Aaa bond rating at a time when significant infrastructure investment was taking place. She oversaw the construction of schools, a municipal wastewater treatment plant, affordable housing, and other necessary facilities.

Ms. Farrell holds a B.A. from Wheaton College Norton, Massachusetts with a degree in American Government.