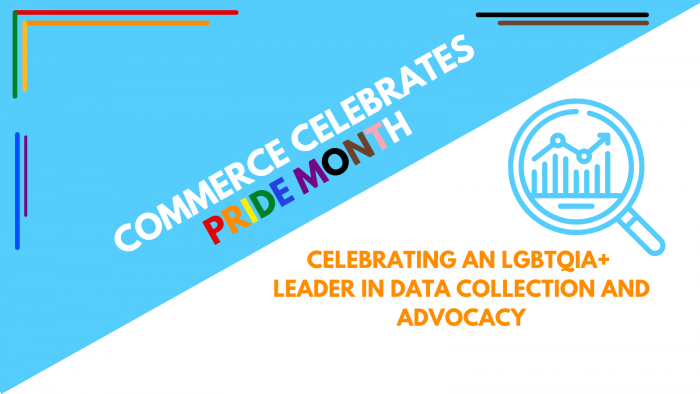 Lesbian, gay, bisexual, transgender, queer, intersex, and asexual (LGBTQIA+) Pride month is an opportunity to celebrate the strides made in the struggle for the human rights of LGBTQIA+ people, but also to acknowledge the challenges that remain. The U.S. Census Bureau is an agency that embraces the diversity of its staff. “The diverse experiences, perspectives, and contributions of the U.S. Census Bureau family – including the LGBTQIA+ community – make us stronger and help ensure that our data are an accurate reflection of the nation,” says Director Robert L Santos. Kevin McLain is a Census Bureau employee that is not only impactful in data collection, but also passionate about advocacy for the LGBTQIA+ community. Kevin works in the Respondent Management Branch of the Economic Management Division (EMD) where he has flourished as a full-service account manager. In this role, Kevin coordinates with large companies to assist them in responding to various Census Bureau surveys. He recently taught a course on respondent contact, as well as led Economic directorate presentations on communication and ways to reduce respondent burden.

Shortly after onboarding in early 2017, Kevin joined the Census Bureau’s Rainbow Alliance affinity group. Rainbow Alliance is a LGBTQIA+ employee and allied network. Its mission is to make the workplace more inclusive and supportive of people of different sexual orientations and gender identities, as well as advancing LGBTQIA+ civil rights. Kevin joined Rainbow Alliance to make friends and soon found himself to be one of the more outspoken and enthusiastic members in sharing his experiences, interests, and viewpoints.

After some time of being heavily involved with the group, he was compelled to step up into a leadership role and became co-chair in January 2018. “As a young person, I think I bring a lot of robust and fun energy to the group. A goal of mine has always been to increase engagement, as well as groom future leaders for Rainbow Alliance,” Kevin said.

One of the first suggestions Kevin made as a member of Rainbow Alliance was hosting a panel event for National Coming Out Day. National Coming Out Day is an annual LGBTQIA+ awareness day, observed on October 11, to support LGBTQIA+ people in "coming out of the closet." He said “it was really important to me to plan a panel where we could all share our coming out stories and what those experiences are like. This way we could give ideas of how others can come out, if they choose to, and how an ally can support.”

Kevin vividly recalls and freely shares his own coming out story and is a strong advocate of people being their authentic selves. “I think it’s so important to come out because you create normalcy for others. Gay people are not often raised by other gay people, so there is often not a path for them to follow. Surrounding yourself with other ‘out’ people is helpful in getting yourself comfortable. It’s also a huge weight off your shoulders. To live closeted and not be able to tell people that you love about who you really are is not only unfair to yourself, but it's unfair to them,” stated Kevin. He came out New Year's Eve in 2011, going into 2012, and says “New Year's Eve is a really special time for me because it's the day I really came into my own.”

There are many ways to be an effective ally and support system for the LGBTQIA+ community. “If a friend or loved one comes out to you, although you may think saying something like ‘I already knew’ or ‘it doesn’t matter’ is helpful, that's certainly displacing what you think the person is wanting from you. A better response would be ‘thank you for sharing that with me.’ You should be aware that sharing that information could be a challenge for them. You can also offer a supportive ear or be a resource to help them communicate to others. “For example, if you're a sister or brother and you're the one who's talking to your parents, who are unsupportive, on behalf of your sibling, that's a great way to be an ally,” says Kevin. “Recognize allyship is not about you. To be an effective ally, you should be informed about things that are going on. Like, don't be surprised that homophobia still exists. You don't need to be an expert, but you should be aware of the situation at hand. And for members of the LGBTQIA+ community, being who you are and being very open about that is one of the biggest forms of advocacy. Like I said earlier, by being you, you've made it more okay for other people to be themselves, as well.”

Rainbow Alliance is dedicated to creating more equities in the LGBTQIA+ community. “We have frequent meetings, feature external speakers, talk about data, lead discussions about specific issues, talk about the history of elected queer officials, and even about what we're doing for Pride month. We also often discuss different ways to be familiar with things that go unnoticed by a general observer but add up to collective marginalization,” says Kevin. “There are so many victories, and we should be really proud of all these victories, but that doesn't mean that there's not more work to do and more conversations to be had,” he continues. “Better structures need to be in place to aid individuals in changing their names and pronouns at work in a timely manner, there are also still disproportionate amounts of homeless LGBTQIA+ youth who are being thrown out of their homes. There are ramifications from the AIDS epidemic, and many older gay men died. A whole generation has been lost, which has effects on community building,” Kevin explains.

“Supporting Pride month means supporting LGBTQIA+ individuals and seeing them as authentic people deserving of civil rights and protections. It means understanding the complexity of sexual orientation, gender, and a person's right to be seen as the person they see themselves as,” Kevin adds, “Pride month to me is a celebratory time in which people who have so many reasons to hide their true selves are going to embrace their authenticity. It gives an opportunity for people who don't know, see, or interact with other queer people to be made aware and to see our visibility, our right to exist and our desire for certain equities. Pride month to me is a celebration of work that's already been done and a time to talk about the work that we can continue to do. I think of Pride as a celebration and a call to activism.”