Over 99% of all U.S. Households Can Respond to the Census Online or by Phone in 59 Non-English Languages 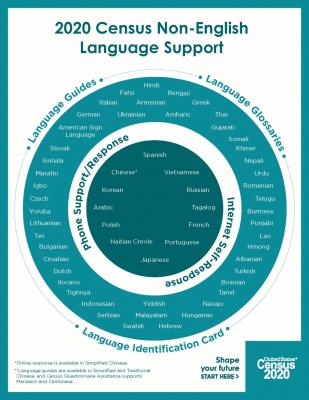 As invitations to respond to the 2020 Census begin hitting mailboxes this week, the U.S. Census Bureau wants you to know you can respond in more languages than ever before. In fact, over 99% of the nation’s households will be able to respond to the once-a-decade population count online or by phone in the language they speak at home.

“By giving households the option to respond online or by phone in English and 12 additional languages, we are giving residents the tools they need to be counted and encouraging them to shape their futures,” said Steven Dillingham, director of the Census Bureau.

Census invitations arriving between March 12 and March 20 will include an insert in the 12 non-English languages, inviting people to respond online or by phone in their language. These languages, ranked by the number of limited-English-speaking households according to American Community Survey data collected from 2012 to 2016, include:

About 13 million households (roughly 9%) will receive invitations in both English and Spanish. These bilingual invitations will go to all households in census tracts (areas with about 4,000 households) where 20% or more of the households primarily speak Spanish, according to American Community Survey data collected from 2013 to 2017.

Beginning in mid-May, census takers across the nation—many bilingual—will visit households that haven’t responded to collect responses in person.

For more information on responding to the 2020 Census count online or by phone a specific language, please see the U.S. Census Bureau press release on the 2020 Census Speaks More Languages.