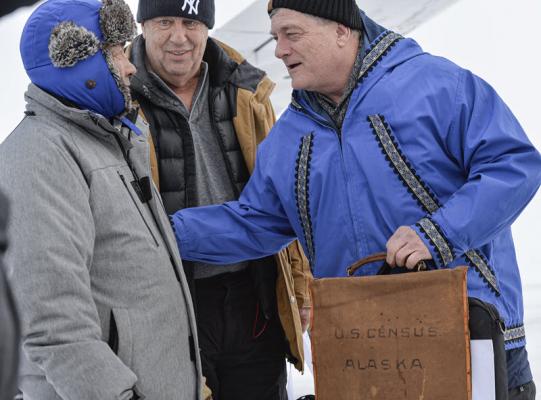 Earlier this week, U.S. Census Bureau Director Steven Dillingham kicked off the 2020 Census in the remote Alaska Native village of Toksook Bay — counting the first person and household in the nation’s once a decade count.

Toksook Bay is a village located on Nelson Island along the Bering Sea in southwestern Alaska. Alaska’s vast, sparsely settled northern areas are traditionally the first to be counted. Local census takers must get a head start while the frozen ground allows easier access to remote areas with unique accessibility challenges. In addition, many residents leave following the spring thaw to fish and hunt or for other warm-weather jobs, making it difficult to get an accurate count in the days leading up to Census Day (April 1).

“The 2020 Census is critically important. No matter where you live, you need to be counted,” said Dillingham. “From the most remote parts of our country to the most urban, there is too much at stake — we are working to make sure everyone can respond and have the opportunity to shape their communities’ future.”

The U.S. Constitution mandates that a census of the population be conducted every 10 years. Census statistics are used to determine the number of seats each state holds in the U.S. House of Representatives and inform how billions of dollars in federal funds will be allocated by state, local, and federal lawmakers every year for the next 10 years.

Following a four-day trip in Anchorage and Bethel, Alaska, Dillingham travelled to Toksook Bay where he was met by village leaders, residents and local census takers. He delivered the first 2020 Census questionnaire to a household selected by village leaders and enumerated the residents of that household.

“I want to thank the people of Toksook Bay for their hospitality,” said Dillingham. “The 2020 Census will shape our future, and I am proud we started this journey here.”

“We have been working to prepare for this count since before 2018 and are happy to see the first count of the 2020 Census begin in our village. Through this historic occasion we have shared with the Census Bureau our traditions and our culture,” said Robert Pitka, Nunakauyak tribal administrator. “The 2020 Census ensures our traditions and our people are marked in history. The census is so important because it helps remote villages like ours receive important community resources now and into the future.”

More than half of households on tribal lands across the country have nontraditional addresses where the Census Bureau can’t mail a census form. With no at-home mail delivery and a short window to respond before seasons change, receiving an invitation this way would be nearly impossible for remote Alaska residents. This is why the Census Bureau worked with Alaska Native leaders to determine the best way to count people living on their lands. In Toksook Bay and other remote areas of Alaska, census takers will visit people at home and will fill out their questionnaire in person.

The first enumeration comes days after the launch of a $500 million public education and outreach campaign featuring more than 1,000 advertisements designed to inform the public about the importance of responding to the 2020 Census. Ads reaching multicultural and historically undercounted audiences are already airing nationwide while ads for general audiences will begin running on February 10, 2020.

Today’s enumeration is just the beginning of the Census Bureau’s comprehensive plan to count everyone living in the United States. In order to count every person, the Census Bureau is building a team by hiring hundreds of thousands of local census takers to knock on doors of households that don’t self-respond to the census. We are actively recruiting people from across the country to apply for the temporary positions.

While the 2020 Census count officially starts with a special operation in Toksook Bay and other remote areas of Alaska, residents of Anchorage, Fairbanks, and other large Alaska cities, along with the rest of the nation will be invited to respond for the first time to the 2020 Census online, by phone, or by mail. Invitations to respond will reach most of the estimated 145 million households across the country between March 12 and March 20, 2020. More information is available on how the 2020 Census will invite everyone to respond.

For more information about the 2020 Census, visit 2020census.gov.