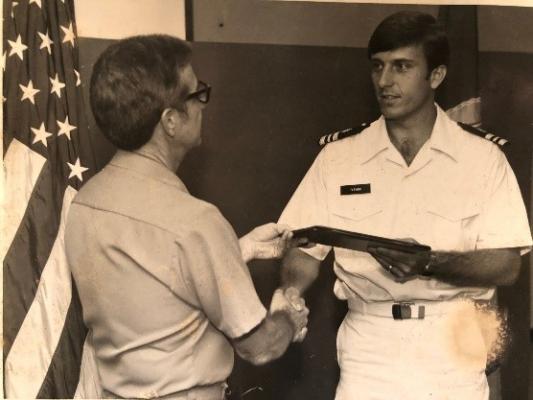 Assistant Secretary Fleming receives award for his work in Guam from Family Advocacy in 1981 at the rank of lieutenant commander.

I am honored to serve the American people in the service of President Donald J. Trump and Secretary Wilbur Ross at the Economic Development Administration (EDA) as we work together to help drive private sector investment to our nation’s most distressed communities.

Through the President’s Opportunity Zones initiative, and by making catalytic investments in support of locally-devised economic development strategies, EDA is making great strides so that all of our communities can benefit from the historic growth of our economy under the Trump Administration.

Prior to joining Commerce, I served as the deputy assistant secretary for Health IT reform at the U.S. Department of Health and Human Services and was a four-term U.S. Congressman representing Louisiana’s fourth congressional district, and a coroner in Webster Parish, Louisiana.

I also started and managed my own private medical practice, specializing in family medicine, in Minden, Louisiana. In addition, beginning in the 1980s, I started a suite of diverse businesses and commercial real estate ventures that have grown across three states, creating hundreds of private sector jobs and that continue in operation today. As a proud Navy Veteran, I credit my military service for helping me become successful in all of these endeavors.

I grew up in a working-class home in Meridian, Mississippi, a town of 40,000 citizens. My father worked for the power company. He was drafted from a farm that he grew up on, out of high school and into the army-air corps (USAF today) to serve during WW II. Several of my uncles served in the Marine Corps and in the Army during the war effort as well. Growing up among such men who made huge sacrifices during this military effort was a tremendous inspiration to me. It was, therefore, a great honor to serve my country in uniform when the opportunity arose.

However, I was also inspired to one day become a doctor. My grandmother was a licensed practical nurse and I was always fascinated by the stories she told of working in the hospital environment. Because of this inspiration and the motivation to help mankind through providing health care, at age 11, I accepted the calling to become a physician. At that same age, I also surrendered my life to my faith.

During my senior year of high school my father suddenly passed away, and my mother was already disabled. While I knew I still wanted to pursue a medical career, I was not sure how I was going to finance it. Nonetheless, I managed to work my way through three years of college.

Unfortunately, I ran out of money during my first year of medical school. Then I read an article in the newspaper about the newly passed Health Professions Scholarship Program (HPSP), in which one could serve in the military and have their medical school expenses paid. That very day in January 1973, I called an Air Force recruiter, but he had not heard of the program yet, so I hung up and called the Navy! They were aware of the program, and shortly thereafter I was sworn in---among the first, if not the first, medical student admitted to the program that still to this day finances the medical education of thousands of budding young physicians. This was one of several highlights of my life in which I could rise to attain my dream to become a physician and also pursue the tremendous opportunity to serve my country as a military member just like those who had gone before me.

During my years of service, our nation was not engaged in any wars except for the “Cold War” with the USSR and so I did not see combat or take care of injured warriors. Nonetheless, I was trained and ready whenever my nation called. And, there were challenges being a Navy medical officer. While stationed on Guam, I delivered a number of babies, some of them during typhoons. Because the island had limited facilities to care for serious injuries or illnesses, I would sometimes be a part of medivac teams to Hawaii where facilities were more capable.

Not only did I treat active duty military members, but I treated their families and retirees as well. It gave me the opportunity to become acquainted with some of the most outstanding and bravest people of our great nation.

I loved military medicine and my time in service. To me, the opportunity to wear the uniform was a high, high privilege. After leaving the service, I remained committed to giving back to the country that had done so much for me.

Veterans Day is time to reflect and recognize the brave men and women willing to lay down their lives for their family, friends, and nation. We must also ponder the many men and women who during our nation’s short history gave in Lincoln’s words, “the last full measure of devotion” so that every American has freedom and the ability to attain their full potential according to God’s plan for us.