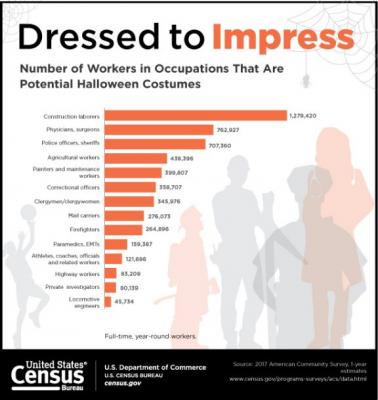 U.S. Census Bureau Graphic on Number of Workers in Occupations That Could Be Potential Halloween Costumes

The following is a cross-post from the U.S. Census Bureau's Facts for Features

Dating back 2,000 years to the Celtic festival of Samhain, Halloween is an ancient tradition associated with images of witches, ghosts and vampires. Today, Halloween has evolved into a celebration characterized by child-friendly activities like trick-or-treating, carving pumpkins into jack-o’-lanterns, and dressing in costumes.

122.4 million
The number of potential stops for trick-or-treaters to occupied housing units for the 2nd quarter of 2019.

59.1 million
The number of housing units where trick-or-treaters had to climb steps in order to fill their bags full of candy in 2017.

991
The number of formal wear and costume rental establishments in the United States in 2016.