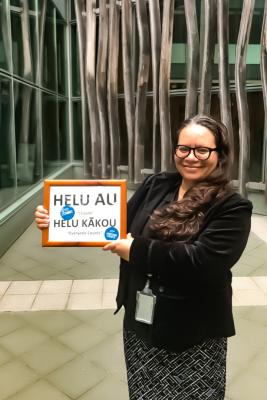 Ed. note: This post is part of the Spotlight on Commerce series highlighting the contributions of Department of Commerce employees during Asian Pacific American Heritage Month.

As an Intergovernmental Affairs Specialist and Tribal Liaison for the U.S. Census Bureau at the Department of Commerce, I serve as a liaison to Native Americans, Alaska Natives, Native Hawaiians, different branches of government, and other stakeholders.

Born and raised in Hawaii on the island of O’ahu, I continue to maintain close ties to my family on that island as well as on the islands of Maui and Hawai’i.  After graduating from the Kamehameha Schools at Kapalama, I attended Brigham Young University at Provo, graduating with a Bachelor of Science degree in Human Development, followed by graduate studies at George Washington University, earning a Master’s in Education degree in School Counseling and a Graduate Certificate in Project Management.

Prior to joining the Department of Commerce and Census Bureau in February 2015, I served as a Federal Public Policy Advocate for the Office of Hawaiian Affairs (OHA) in its Washington D.C. office.  While at OHA, I developed budgets and managed financial resources; collaborated with other Native Organizations; planned community events; designed tools to track federal legislation; and provided updates of federal actions and activities to executives and elected officials.  Also during that time, I served as a Development Specialist for Partners in Development Foundation, a non-profit organization headquartered in Honolulu, providing executive level updates on Native Hawaiian issues and researching funding opportunities.

From 2000 until he passed away in 2012, I had the privilege and honor to work for Senator Daniel K. Inouye of Hawai'i, in his Washington D.C. office.  At the time of his passing, I was a Legislative Assistant, responsible for a portfolio that included Native Hawaiian & Pacific Islander issues, American Indian & Alaska Native issues, and Department of the Interior Appropriations.  My tenure with the Senator came with responsibilities and opportunities that allowed me to grow both professionally and personally.  Along with learning to navigate through the halls of our Nation’s Capitol, it was during these years that I earned my most cherished of titles — wife and mother to my wonderful husband Sione Saafi, and two of my three awesome and amazing boys.  The person I am today comes not from the influence and mentorship of a single person; rather I am who I am because of many.

Like other Native Hawaiians, it is my ‘Ohana, or my family, that has shaped and molded me into the person I am today.  My parents divorced when I was two.  Because of their love for my two older brothers and me, my parents agreed that my dad would have custody of us.  However, his work in the hospitality industry, including managing restaurants and teaching culinary arts, meant working hours that conflicted with the norm.  As a result, I was also raised by my grandparents and my aunt and uncle in Ku`u Home Aloha, our family home in Kaneohe, and Hale Pelekikena, the home of the president of the Kamehameha Schools at Kapalama.  Their aloha (unconditional love) reinforced that of my parents, giving me values and teaching me lessons that have guided my life’s journey:  Aloha (unconditional love), Ho’ohana (work with purpose), Ho’omau (never give up), Kulia I Ka Nu’u (do your personal best), Ha’aha’a (be humble), Ike Loa (continue to learn), and Kuleana (be responsible).  My ‘Ohana became examples of goodness and industry, teaching me how to connect my head to my heart in work and in relationships.  More than anything, I know my family is with me no matter what happens in my life — and that is why I am who I am today.

Today I strive to instill these same values in my own ‘ohana. My loving husband Sione and my three incredible boys Pulotu (13), Michael (12), and Hafu (6) challenge me every day to be a better wife, mom, and person than I was the day before.

Asian Pacific Islander Heritage Month is a celebration of a multitude of cultures, histories, traditions, and contributions that have defined history and made our country a better place. It is also about honoring those who came before us and celebrating the rich legacies they created for all of us to enjoy.  One who did was my great grandmother, or Tutu, Bina Mossman, a trailblazer in her own right.  Born after the overthrow of the Hawaiian Kingdom, Tutu was a noted music composer, skilled territorial legislator, and respected civic leader.  At the invitation of and under the mentorship of Queen Lili’uokalani, she rehearsed her well-known glee club at Washington Place, now the Governor’s Mansion, and composed dozens of mele, or songs, about people, places, and events she loved and enjoyed.  Her mele or songs continue to be performed and recorded by today’s artists.  She served as the first woman legislator from Hawaii’s fifth district in the Hawai`i Territorial House of Representatives for three terms; was elected National Committeewoman of the Republican Party, and was appointed High Sheriff of the Territory.

As a career civil servant and a Native Hawaiian, I have been able to support the Lahui (the Hawaiian people) by linking Native Hawaiians to federal resources and data, educating those in the federal government about Native Hawaiian and Pacific Islander issues, and providing a much-needed Native Hawaiian voice in conference rooms, meetings, background materials, and briefing documents.  Two civil servants who stand as role models for me and served Hawai`i, and the Nation with honor and distinction are the late Senators Daniel K. Inouye and Daniel K. Akaka.  Although they were distinctively different in personality, both served with the same heart — a heart for the people of Hawai`i; a heart filled with Aloha.  Their collective legacies live on today through their beloved ‘ohana, their loyal staff, the programs they established, the federal dollars they brought to Hawaii, and most of all,  through the example they set in negotiating and working collaboratively with colleagues on both sides of the aisle. They were iconic and inspirational examples of what a lifetime in civil service could mean.

To those considering a career in federal government opportunities abound - do your research and learn how you could best contribute to an agency.  Success requires a wide array of competencies, including oral and writing skills that are clear and engaging; performance that is biased towards results; and relationships that are supportive, respectful, candid, trusting, and nurturing.  To these, I would add leadership – specifically, leadership that values commitment over agreement; loyalty over obedience; moral courage over political correctness; ethical behavior over personal accomplishment; doing good over being right; and public service over personal gain.  We know this as servant leadership – leadership that embraces the singular value that defines who I am as a Hawaiian – Aloha.  I strive daily to incorporate these values into my academic studies, professional career, and personal life.  As it has for me, living your life with Aloha will serve you well!