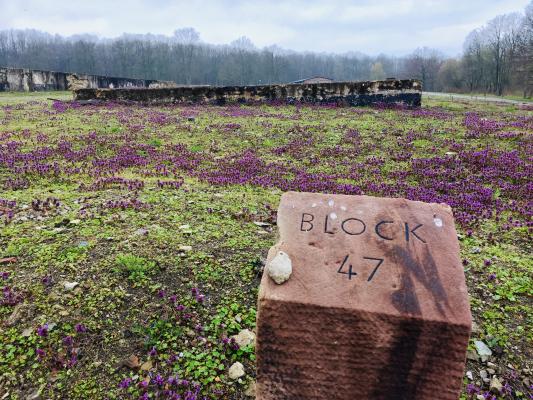 I remember that cold April some years ago when my son Michael and I walked through the Buchenwald Concentration Camp in Germany.  It was Michael’s suggestion to visit the place where my father Benjamin and his brother Berek were imprisoned as Jews with the other “untermenchen” which is German for inferior people or “beneath human.”

For many years I resisted the idea of making a pilgrimage to a remembrance of pure evil and hatred. I didn’t feel a need to remember a past, which always felt like part of the present when I was growing up. But we went. After paying the admission fee to enter the camp, we walked along the path leading to block 47 in the big camp where my father and many others were housed in cold and damp muddy barracks.  Further down the path was the Little Camp where Berek was imprisoned under even harsher conditions. It was hard not to fixate on every detail. Our eyes were locked on the ground and remnants of rubble and dark earth.  The wooden barracks were gone and all that remained were small purple flowers soaking in a gentle rain of such contrasting tranquility.

Members of my mother Sara’s family were murdered in Poland. Sara lost her three sisters and father.  She fled with my grandmother and joined partisans who lived in the forests of Poland and Russia for several years while fleeing the Nazi’s occupation. But they were not alone in this horrific experience and my family’s story is unfortunately not unique. Sara was part of a generation that went through Nazi hell and many did not live to tell their stories or share them with their children… and the generations ahead.

Resisting and refusing to be transported to Buchenwald, my father’s parents committed suicide and left two young boys in their late teens to fend for themselves. My father told his brother Berek, that if and when the war ends and they are liberated, they should meet each other at the main gate. And when that day arrived… when the camp was liberated in April 1945, my father waited outside the gate not realizing that his brother Berek had been executed during a death march only a few days earlier. And during that moment, I envisioned my father standing there by the gate… age 17… alone.

Michael and I continued to walk through the camp. We viewed a large gathering of German officials and press for the opening of the new Buchenwald Museum.  Crowds were gathered looking at exhibits of past atrocities. And there I stood, a walking artifact of a Holocaust survivor… walking among exhibits where lives were forever changed or extinguished.

Carrying and sharing this surreal perspective is painful. Honestly, I hesitated after being approached about writing a blog from the perspective of being a descendant of Holocaust survivors.  What story might I share that hasn’t been written by countless other families?  What can I share that hasn’t already been expressed by so many others?

Both of my parents passed away recently. Most of their generation will be gone in a few years, no longer communicating the impact of these life-defining experiences. And so, I recognize, perhaps more than ever, that we must carry our family’s stories forward. But perhaps more importantly, we need to become part of the narrative and continue to build new stories. And we must learn that humanity can both prevent and overcome great injustices, in order to thrive under a democracy. We can all remember this horrible period by preventing anything like this to happen again while creating wonderful new narratives about all that is good about this world.

Avi Bender is the Director of National Technical Information Service, U.S. Department of Commerce.  He and his wife Lili and their family of children and grandchildren, live in suburban Maryland and are busy creating great memories.