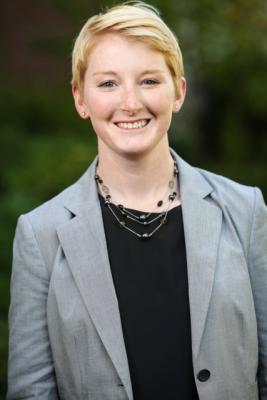 While on my first deployment in the U.S. Army in support of Operation Iraqi Freedom, I had the honor to lead an engineering platoon in Basra, Iraq, building infrastructure for the local populace and our military allies to include roads, airfields, and other off-base projects.

Upon returning to the United States, I learned about a newly created program called Cultural Support Teams. U.S. Special Operations Command realized their all-male special operations teams needed women to accompany them on missions to interact with Afghan women and children – a task that was culturally inappropriate and sensitive in Afghan culture, but necessary to gather information on terrorist activities in their communities. The quiet professionalism of our special operations teams and their ability to embrace diversity to strengthen their mission is a lesson I will never forget. During my two deployments to Afghanistan supporting 75th Ranger Regiment, I came face-to-face with the economic hardships encountered by the Afghan people. Through decades of war and neglect, Afghanistan’s infrastructure was largely destroyed.

Having spent five years across the sweeping deserts of southern Iraq and the majestic Hindu Kush mountains of Afghanistan focused on economic development and infrastructure revitalization, I knew I wanted to continue helping communities and individuals thrive. I hung up my combat boots and left the Army as a young Captain in 2013, and as a first-year MBA student at Harvard Business School I was confronted with Mary Oliver’s daunting life question that got me thinking about what I could do next:

“Tell me, what it is you plan to do with your one wild and precious life?”  -    Mary Oliver

While in my entrepreneurship class, it became clear there was an opportunity to build a business that complemented the very work I did in Afghanistan—import rare products from Afghanistan to create jobs and prosperity across impoverished communities. I co-founded Rumi Spice to import saffron directly from Afghan farmers and connect them to the international market. Because saffron is the most expensive spice in the world, and offers farmers a viable alternative to producing opium, we would economically empower the Afghan people, while also giving chefs and consumers in the U.S. an opportunity to have fresh, sustainably grown saffron in their kitchens. We sought to catalyze the market-driven economic development one farmer at a time, and we are proud to have more than 400 farmers in our network and employ approximately 1,000 Afghan women.
As a new member of the Economic Development Administration team, I am inspired by our mission to lead federal economic development by promoting innovation and competitiveness. I serve as a Policy Advisor in the Office of Innovation and Entrepreneurship and I’m particularly passionate about our work to increase access to risk capital, support disaster recovery and resiliency, foster a thriving and scalable innovation ecosystem, and advance entrepreneurship-based economic development across the United States. I am reminded of my favorite Afghan proverb when I think of the impact made through our programs, talented people, and regional offices:

“Drop by drop, a river is made” – Afghan proverb

I’ve always believed the more diverse the team, the better the outcomes; and in fact, I’ve lived this time and time again whether it was in the boardroom or on the battlefield. My special operations counterparts were proud to recognize higher mission success when women were integrated with their teams. And when leading a company, women bring a diverse and needed skillset, often improving businesses with their new and different strategies.

The sobering statistics remain: Research suggests women startup founders represent just 17% of new startups and they get access to less than 1% of venture capital. As a woman in the military, it wasn’t uncommon to find myself the only woman on a mission, and as a cadet at West Point, my class was comprised of roughly 10% women.

For these reasons, I’m delighted we can celebrate Women’s History Month to honor the contributions of women past, present, and future. I’m excited about the work ahead to empower and embolden the next generation of women. We are truly standing on the shoulders of giants who have paved the way for us.