The Trump Administration is Building a Stronger Future 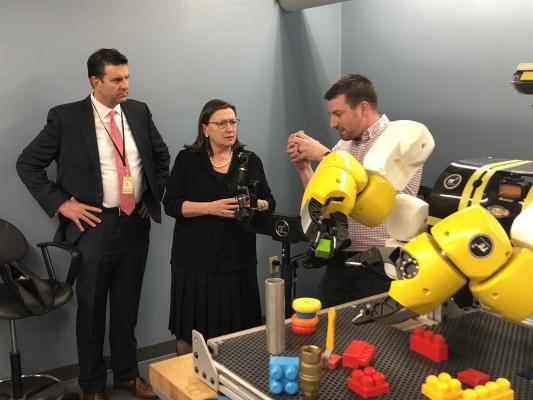 Since I started at the Department of Commerce, I have found great enjoyment visiting private businesses to learn about how they are growing their local economy and creating jobs in their communities. This has been particularly rewarding as the President makes great strides in creating the conditions for a thriving, robust economy—especially in my home state of Pennsylvania.

Last week, I was honored to visit RE2 Robotics in Pittsburgh. This domestic manufacturer builds advanced robotic arms for military, energy, aviation, aerospace, and other applications. It also conducts research to continually innovate and expand its product line.

RE2 Robotics employs 43 people and is constantly growing—all while maintaining an entirely domestic supply chain. In fact, all of RE2’s manufacturing needs are provided by companies within a 200-mile radius of Pittsburgh.

Its location in southwest Pennsylvania is integral to RE2’s success. Pittsburgh has a storied history as a leader in the manufacturing industry, including the critical sectors of steel, aluminum, glass, and electronics. The city also hosts innovative universities and colleges, most prominently Carnegie Mellon University and the University of Pittsburgh. Today, following decades of deindustrialization in the 80s and 90s—not to mention the aftereffects of the Great Recession—Pittsburgh, and the entire state of Pennsylvania, is experiencing an economic rebirth in advanced manufacturing enterprises and countless other areas.

President Donald J. Trump’s Administration has placed the highest priority on rebuilding American communities, which were devastated in the wake of previous economic downturns. Against all odds, the President has been overwhelmingly successful--5.3 million jobs have been created since President Trump’s election with an average of 18,500 manufacturing jobs created each month. And it’s not just job growth, Americans are taking home more as workers have seen their largest nominal wage growth in nearly a decade with year over year wage gains increasing by 3.3 percent in December, the fastest pace since April 2009.

The mission of the Department of Commerce is to create the conditions for economic growth and opportunity. By leveraging the Department’s comprehensive business knowhow, data, and even funding, we are working to create those conditions and assist RE2 Robotics and other companies like it. We are seeing a new economic renaissance and a manufacturing resurgence taking place in Pennsylvania and in communities all over the country. For my part, it’s great to know that the Trump Administration is doing its part to help companies succeed in Pennsylvania and across the United States.