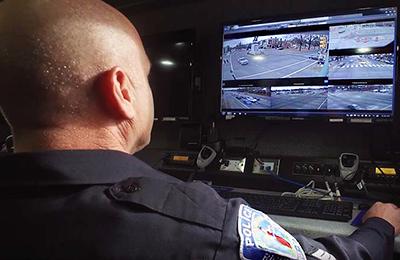 Imagine a mountain town of 7,000 residents welcoming 500,000 guests. That is the scenario that Sturgis, South Dakota, faces every summer in August. For 78 years, this Black Hills community has hosted the country’s largest motorcycle rally, and every year is a little different. In 2018, FirstNet debuted in the Black Hills of northwest South Dakota, and public safety experienced the difference of communicating over the FirstNet network.

The story of FirstNet traces back to the tragic events of 9/11, when first responders could not communicate over existing networks. Following 9/11, public safety leaders lobbied Congress for a reliable, interoperable communications network dedicated to emergency communications.

In response, Congress created the First Responder Network Authority—an independent authority within the U.S. Department of Commerce—to establish, operate, and maintain a broadband network for public safety. In March 2017, following a highly competitive process, FirstNet entered into a 25-year contract and public-private partnership with AT&T to build the network. For the first time, public safety communications will be based on commercial standards, resulting in lower costs and the rapid evolution of advanced communication capabilities.

These capabilities are necessary for police, fire, and emergency medical services personnel who increasingly rely on mobile devices, like cell phones and tablets, to keep the public safe and secure. These kinds of devices require reliable broadband coverage and capacity—two elements that can often be a challenge at large-scale events, especially in rural areas like Sturgis.

Making a Difference in South Dakota

“This year was different,” says Jeff Pierce, Technical Administrator for the South Dakota Bureau of Information and Telecommunications and Statewide Interoperability Coordinator for South Dakota. “First responders had no problem with service to their mobile devices on the FirstNet network. Troopers were able to work from their vehicles and put less congestion on the radio network. It was more convenient, and they had faster access to critical data used in the field.”

With FirstNet, Sturgis responders had access to always-on priority and preemption for both voice and data, which allowed them to stay connected even when operating on a highly congested network. This was particularly impressive considering that attendance at the 2018 Rally grew nearly 8% from 2017.

“Normally, we experience a 2-4% busy signal on the land mobile radio system,” recalls Pierce. “This year it was 0.6%.” Pierce attributes this improvement to greater use of mobile devices on FirstNet by law enforcement and other public safety officials. “Nothing else changed. We used the same applications and the same computer-aided dispatch systems. Having priority service during times of high congestion makes a difference.”

Public safety leaders across the country are also experiencing the benefits of FirstNet, echoing those in Sturgis.

Advantages Realized by the City of Richmond, Virginia

In Virginia, FirstNet has enabled the City of Richmond’s mobile command center to serve as a mobile office for anyone that shows up with a FirstNet device. Officers experienced the advantages of FirstNet’s advanced speeds and improved interoperability, which enabled them to receive live camera and weather feeds for monitoring, pull up suspect information, and tie computer-aided dispatch interfaces to 911 call centers. FirstNet proved it could handle everything from day-to-day operations, to emergencies, to large-scale events.

“We heavily use mobile data in order to be more efficient in delivering information to responders and to retrieve information independently from the communications center,” says Stephen M. Willoughby, director and chief of the Department of Emergency Communications in the City of Richmond. “FirstNet allows us to have that priority and preemption so that it is available to us all the time.”

In North Carolina, the Emergency Management Coordinator for the Charlotte-Mecklenburg Emergency Management Office, Michael Tobin explained how critical priority and preemption are during large, planned events, like NFL games. “Coverage is great until kick-off of a Carolina Panther game when hundreds of fans are on the network.” Once a game is underway and fans start sending video or texts of the game to friends and family, first responders experienced slow or dropped connectivity. Scenarios like this are typical on “game days” across the country. While inconvenient for the average fan, delayed or weak signal can have dire consequences for first responders requiring reliable communications during an emergency.

With FirstNet available in North Carolina and across the United States, the robust and reliable network can help close these communication gaps for public safety. “Having priority and not competing with the general public is a very viable option for us,” said Tobin.

Beyond priority and preemption, first responders are experiencing the benefits of increased coverage and capacity that come with FirstNet. Since March 2018, AT&T has been working to build out Band 14—high-quality spectrum that is dedicated to FirstNet—rapidly expanding FirstNet across the nation. With more than 1,000 new Band 14 sites planned, FirstNet will not only improve existing coverage, but also expand it into rural areas where coverage gaps have long existed.

In addition to Band 14 sites, FirstNet offers deployable network assets dedicated specifically to public safety users, such as Satellite Cell on Light Trucks (SatCOLTs). First responders in Chino, California, recently experienced the power of FirstNet’s deployables during the city’s annual Fourth of July Freedom Festival. With crowds approaching 15,000 spectators, local law enforcement had an opportunity to trial FirstNet’s dedicated SatCOLT with Band 14 to bolster emergency communications in and around the event. As a result, responders reported a reduction in latency for their drone video feed.

With FirstNet now available, countless first responders are gaining access to the most advanced emergency communications solution available today. For more information on products and services, visit FirstNet.com. To learn how your agency can participate in the First Responder Network Authority’s public safety programs, email us at info@firstnet.gov or visit our webpage for more information: www.firstnet.gov. Also, thanks for speaking with us in person at the International Association of Emergency Managers 2018 Annual Conference where our staff were present and hosted a panel.