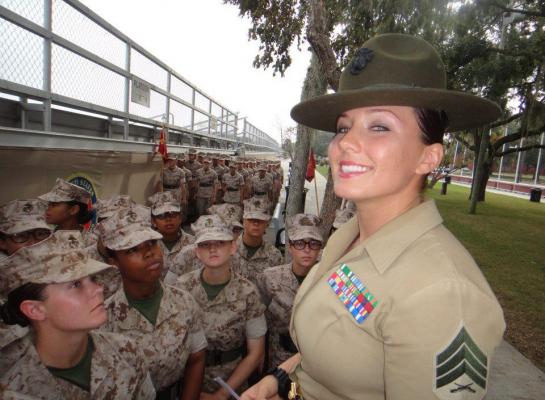 My name is Stephanie Mendez and I am a Senior Management and Efficiency Analyst within the Office of the Secretary, Office of Facilities and Environmental Quality. In addition, I am the President of the Commerce Veterans Affinity Committee, as well as a Student at Johns Hopkins University where I am finishing up an MBA program. I am a single mother to an amazing and fascinating young lady named Scarlett, and, in my free time, I work as a musician where I sing for two local bands.  I grew up in many places, mostly along the east coast, and graduated high school in Thurmont, Maryland. After graduating from high school, I left the following day for Marine Corps recruit training or “boot camp” and was excited and terrified at what I would encounter. At age 17, I was considered an adult and making the biggest decision of my life.

Becoming a Marine was the best foundational choice I could have ever made. I learned how to become a leader, how to take responsibility for myself and others, how to manage stressful situations and multi task high impact/high tempo programs, all at a very young age. The military instilled in me discipline, respect, loyalty and perseverance to a degree far greater than I could have anywhere else. I learned what it meant to have a family even though we all started off as strangers to one another, and would spend several years moving around the world with a few Marines I grew close to very early on. I deployed a few times and with some of these same people and learned how to endure very unique working conditions along with being so far from home with no ability to call or contact anyone. I learned the value of writing a letter in these many months in the deserts of the middle east. I developed bonds with people from all walks of life, and to this day have continued these strong bonds.

I had always known I would became a military drill instructor. It was a female Marine after all who walked into my school and without a word defined my entire future simply by her intensity and confidence. My last duty station in the Marine Corps would be as a drill Instructor, where I would own the opportunity to mold and influence the future of 100s of Marines who also happened to be women.  This was the most challenging but most rewarding job I will probably ever have in my entire life. Working on 2-3 hours of sleep for 91 days in a row and eating when time allowed but spending every single moment of every single day and night showing the future of the Corps how much they and I could endure in the hopes of becoming the very best versions of ourselves. It was a true honor to have the ability to cause that effect and leave my impression on so many young women. I am in contact with many of my recruits and fellow drill Instructors still today and am proud to be a friend and mentor to them.

Being a veteran is something I am incredibly proud of today. As I grow older and experience more in life, I find that I have so many skills and experiences to draw upon to maneuver each situation because of my time as a Marine. I have also found that I have an endless network of people to call upon when in need and vice-versa.  When I meet a Veteran in daily life, it is a beautiful phenomenon that we have this unspoken and immediate bond. This is something I will be forever grateful for.

I believe life is a series of choices, and with every milestone, challenge, heartache and victory we face a choice in how we will respond. We possess the ability to move mountains, the real question is if and how we will choose to do so.