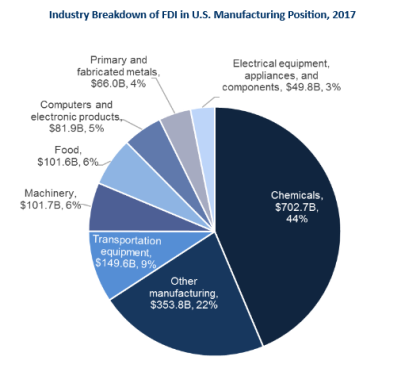 The following is a cross-post by Maureen Book, Research Analyst, SelectUSA

With Manufacturing Day fast approaching on October 5, this is a great opportunity to recognize the important role that foreign direct investment (FDI) plays in the U.S. manufacturing sector. Throughout the past 20 years, the manufacturing sector has been the largest recipient of all foreign direct investment in the United States, and as of 2017 it represented nearly 40 percent of the total U.S. FDI position, amounting to $1.6 trillion. This is almost three times the amount of the next largest sector for FDI in the United States: finance.

What types of manufacturing are attracting investment?

Within the manufacturing sector, the chemicals industry is the largest recipient of FDI, reaching $702.7 billion in 2017, or 44 percent of all manufacturing FDI stock, according to the latest data released by the Bureau of Economic Analysis. Diving even deeper, the pharmaceuticals and medicines subsector makes up 74 percent of all chemicals industry FDI, representing nearly $517 billion of investment.

Where is manufacturing FDI coming from?

In terms of the fastest-growing sources of FDI in U.S. manufacturing, foreign investment from China has grown the most since 2012, with an average annual growth rate of 64.5 percent. Following China are Luxembourg, Brazil, Ireland, and Canada.