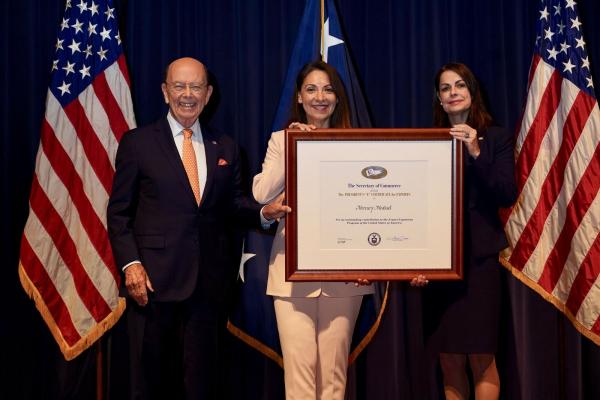 On Monday, May 21, U.S. Secretary of Commerce Wilbur Ross honored 43 American companies, representing 18 U.S. states and Guam, with the 2018 President’s “E” Award to kick off World Trade Week. The President’s “E” Award is the highest recognition any person, firm, and organization can receive for making a significant contribution to increasing U.S. exports.

This year’s recipients included Hydro-Thermal Corporation of Waukesha, Wisc. Tracing its roots back to 1927, when inventors John White and Roy Miller patented their steam powered heating equipment, Hydro-Thermal Corporation is now the global leader in the development and manufacturing of Hydroheaters. Hydro-Thermal is represented in six continents and its technology is used in facilities in more than 85 countries around the world.

FTC Commercial Corporation (FTC) of Los Angeles, specializes in financing start-up businesses, public entities, and global businesses. FTC partners with the International Trade Administration and U.S. Department of Commerce to promote export trade and strengthen the competitiveness of U.S. companies in the international market. Since its founding 10 years ago, FTC has funded startups that have grown to more than $30 million in sales.

This year marks the 56th annual “E” Awards presentation. In 1961, President Kennedy signed an executive order reviving the World War II “E” symbol of excellence to honor and recognize America’s exporters.  The “E” Award ceremony is one of the highlights of World Trade Month, a month-long celebration of the benefits that U.S. exports bring to national, state, and local economies through job creation and growth.

American companies are nominated for “E” Awards through the U.S. and Foreign Commercial Service office network, located within the Department of Commerce’s International Trade Administration. Record years of successive export growth and an applicant’s demonstration of an innovative international marketing plan that led to the increase in exports is a significant factor in selecting winners.