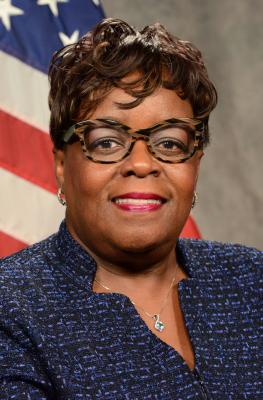 Ed. note: This post is part of the Spotlight on Commerce series highlighting the contributions of Department of Commerce African Americans during Black History Month.

I began my career with the U.S. Census Bureau in mid-1975 as a Field Representative. Shortly afterward, I joined the regional office team where I noted an absence of the professional staff who looked like me – African American females. Since that time, I have worked tirelessly to serve as an example to other women of color by positioning my career and providing the agency with an undeniable commitment to excellence and being an exemplary model to others.

In 1984, I moved into a Survey Statistician role and later competed for the Geographer position – again, there were no African American women in these roles in the region. My continued desire to explore other opportunities lead me to the position of Geographer and subsequently to a Supervisory Geographer. By 1998, after learning the operations of the vast majority of all census operations and surveys, the decennial processes and being on the ground floor of planning for special operations such as the Special Census Program, I was then appointed to serve as the Chicago Assistant Regional Director. I then served as Deputy Regional Director for the 2000 and 2010 Censuses. By 2016, I was appointed to serve as the first woman of color, to be Chicago Regional Director. Here, I’m still currently serving the eight state Region covering Arkansas, Illinois, Indiana, Iowa, Michigan, Minnesota, Missouri and Wisconsin. My extensive career with the Census Bureau spans five decennial Censuses, and multiple survey data collection innovations and improvements.

I have to credit my success and determination, to my upbringing in Mobile, Alabama, and being raised in the Africatown community north of the city – which is on the National Register of Historic Places. Formed by a group of 32 West Africans, Africatown is three miles north of downtown Mobile – built by slaves brought in 1860 aboard the Clotilda. By planting roots, the slaves founded a community in Alabama where they were able to retain their West African customs and language into the 1950s. A significant historical community in the history of African Americans. It was there where I learned the true meaning of working hard to overcome, sometimes seemingly impossible, challenges.

My family instilled in me strong southern disciplines such as the importance of education, helping others in need, community involvement, mentoring, a strong work ethic and a strong sense of faith. In 1974, I earned a Bachelor of Arts in Business Management, with a concentration in Economics from Stillman College in Tuscaloosa. Later, I attended the University of Southern Alabama and Governors State University to pursue postgraduate studies in geography and statistics. As a proud member of the Delta Sigma Theta Sorority, Epsilon ETA Chapter, I further learned the value of sisterhood among African-American Women.

My commitment to the philanthropic community and my continued dedication to my faith, lead me to become an Associate Pastor of Inner Changing Word Christian Church in 2003. From my professional and personal endeavors over the past 42 years of working with the Census Bureau, I have a firm commitment to knowledge sharing and mentoring, understanding that this is pivotal in the success of the region and legacy building for those women coming through the ranks. In the words of the late great Maya Angelou, “Each time a woman stands up for herself, without knowing it possibly, without claiming it, she stands for all.” I am a firm believer my legacy at the Census Bureau will be the foundation for other women, particularly those of color.

Black History Month is a critical time for African Americans, recognized for our significant contributions to this country throughout history. We must not settle for one month, but continuously distinguish and celebrate those who have, and will continue to blaze the trail for young professionals looking to strive bolder and broader. The Census Bureau is fortunate to have many young talented and gifted women and people of color; we must celebrate their accomplishments and lift each other to succeed. I encourage young professional women of color to challenge themselves in professional disciplines such as geographers, mathematics, and statisticians, go beyond expectations and look to make significant changes that will forever change the fabric of our agency, and the world.

Finally, most who know me, know I am a major football fan, notably the University of Alabama Crimson Tide. There are many principals of the game which I have applied to my professional journey – and in my own words, “Once we understand that a plan is only as good as those who are put in the game to mobilize that plan. On a football team, everyone has to know their role – these plans will help us to truly function as a team, with the ultimate goal of winning.”