Honoring the Service of Our Veterans 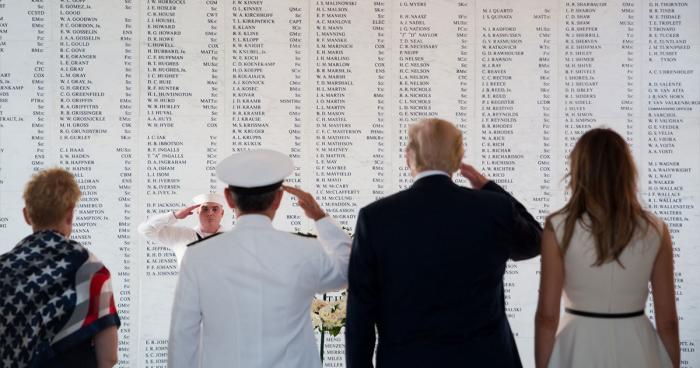 President Trump proclaimed today, November 11, 2017, as Veterans Day – honoring all Americans who have served in the U.S. Army, U.S. Navy, U.S. Air Force, U.S. Marine Corps and the U.S. Coast Guard, both in times of war and peace.

Our veterans represent the very best of America. They have bravely answered the call to serve in the finest military force in the world, and they have earned the dignity that comes with wearing the uniform and defending our great flag. On Veterans Day, we honor all Americans who have served in the Army, Navy, Air Force, Marines, and Coast Guard, both in times of war and peace. For nearly 100 years, since the end of World War I, Veterans Day has given us a time to pay due respect to our veterans, who have passed the torch of liberty from one generation to the next.

Part of paying our respect means recommitting to our Nation's sacred obligation to care for those who have protected the freedom we often take for granted. I have pledged to provide our service members with the best equipment, resources, and support in the world – support that must continue after they return to civilian life as veterans. This is why veterans' healthcare is a top priority for my Administration. I have signed legislation that improves accountability at the Department of Veterans Affairs (VA) and provides additional funding for the Veterans Choice Program, which ensures veterans continue to receive care in their communities from providers they trust. I have also signed legislation to give veterans GI Bill education benefits for their lifetime, and legislation to fix the VA appeals process, to ensure veterans can access the resources they are rightly due.

As Commander in Chief of our heroic Armed Forces, I humbly thank our veterans and their families as we remember and honor their service and their sacrifice.