The Critical Role of Hurricane Hunters in Protecting American Communities 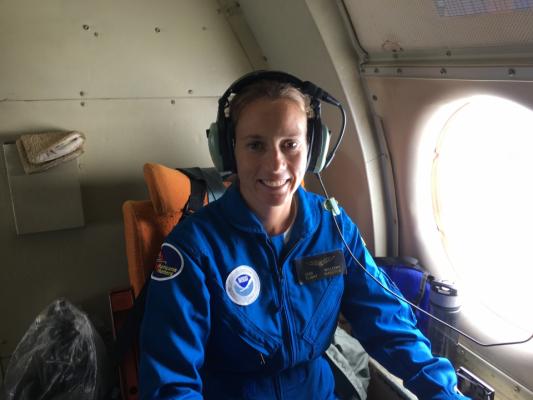 In connection with American Heroes Week (July 24 – 28, 2017), the U.S. Department of Commerce is proud to highlight its own American heroes and the important role Commerce agencies play in serving and protecting American communities.

On board NOAA Hurricane Hunter aircraft, there are no small jobs. Each member of the crew plays a critical role in ensuring the safe operation of the aircraft and the collection of quality weather data. The following is a feature highlighting one Commerce hero, NOAA Meteorologist and Flight Director Jessica Williams, who serves on NOAA's Lockheed WP-3D Orion and Gulfstream IV-SP hurricane hunter planes.

Jessica Williams has always thirsted for an understanding of the environment in which we live. As a high school senior deciding on a college, she had the foresight to pursue her interest in weather and the atmosphere. Her compass pointed her to Penn State University. There, Williams joined the United States Air Force Reserve Officer Training Corps. Her studies at Penn State concluded with a bachelor's of science degree in meteorology. She bolstered her resume with a master's of science degree in geographic information science from Northwest Missouri State University.

Williams is among those who have been able to make her passion her paycheck. Following college, Williams was able to merge her loves of aviation and atmospheric data by working as a weather officer in the U.S. Air Force for four years. She later worked as an aviation meteorologist in NOAA’s National Weather Center Service Unit and held a position as a wind resource modeling analyst. Her next career move was to become a flight director at NOAA’s Aircraft Operations Center, home the NOAA Hurricane Hunters.

When flying on a mission to investigate a tropical cyclone, Williams is responsible for ensuring that the aircraft to which she is assigned is safely navigated through the storm and all the necessary data is collected.

The work, however, begins well before “wheels up.” Mission preparation involves collecting mission objectives from researchers and reviewing operational directives. “From this, we put together a tentative flight plan to accomplish these objectives,” says Williams. “I study the weather pattern, forecasts, and any potential weather hazards based on my training and experience, for the time period and locations we’ll be flying in and around.” She later disseminates this information to the crew in the pre-flight briefing.

Safety is paramount and once airborne, Williams is buckled in for what can be more than an eight-hour flight. “My eyes are on the radars at all times first and foremost, and secondly the data we’re collecting, which gets transmitted to the National Hurricane Center and often ingested into forecast models,” she says.

As one can imagine, working with hurricanes is anything but predictable. “Flight tracks, plans and objectives often change in flight, so we need to be prepared to discuss whether these changes are safe,” says Williams.

The idea of safely surveying hurricanes almost seems like a contradiction, but the NOAA Aircraft Operations Center team has made it standard operating procedure.

“This means flying right through the eyewall, which contains intense updrafts and downdrafts, extreme precipitation, lightning and often hail,” says Williams. Pre-flight training is essential to preparing the crew for these high-risk environments. “With knowledge of the storm dynamics, an understanding of aviation radar, and lots of experience from the crew we avoid these more dangerous areas.”

The focus of her work sometimes can hit pretty close to home, most recently with Hurricane Matthew, “with the track coming so close to Florida and many of us having family and friends on the East Coast.” But she says it’s worth it, especially knowing how quickly the data she and her fellow Hurricane Hunters collect can directly affect people’s lives.

The same spirit that inspired a high school senior hasn’t dwindled. Williams’ drive hasn’t slowed. Her passion hasn’t decreased. Her goals haven’t changed. “To use my God-given experience, education and passion for science as I work with an excellent team to gather critical weather data in the storms,” is what it’s all about for Williams. “Data that improves forecast accuracy and warnings to save lives and property.”