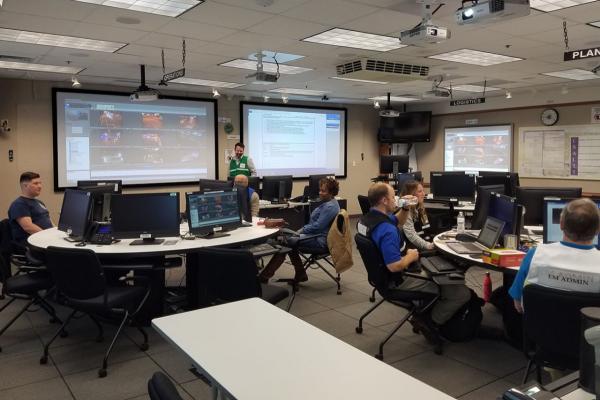 The following is a cross-post from the U.S. Census Bureau blog

When major wildfires broke out in northern and southern California last week, Ron Jarmin, performing the nonexclusive functions and duties of the director of the Census Bureau, activated the agency’s Emergency Preparedness and Response Team (EPRT).

Demographic, economic and business data are crucial in times like these.

That’s why the Census Bureau collects data year-round for emergency management professionals at the federal, state and local levels.

The information was critical for planning and recovery during this year's hurricane season.

Hurricane Michael that hit the Gulf Coast last month was the seventh Atlantic hurricane this year. The EPRT has prepared hundreds of reports this season on counties that may be affected.

The EPRT is a team of economists, demographers, statisticians and outreach professionals. Its mission: To coordinate, prepare and disseminate the data to emergency teams, the public and the media.

In August 2017, Hurricane Harvey became the first major hurricane to impact the United States since Hurricane Katrina in 2005.

Technology has come a long way since then. What used to take many staff hours to produce now can be done in minutes with newly developed easy-to-use tools to disseminate data that were not available then.

Economic data on businesses, such as number of employer and nonemployer businesses, total revenue, and key statistics on the biggest industries in a county are quickly assimilated at various geographic levels. These data help officials determine their economic portfolio and potential needs during and after the disaster event.

The Census Bureau’s emergency response team works very closely not only with sister agencies at the U.S. Department of Commerce (National Oceanic and Atmospheric Administration and Economic Development Administration), but with several other federal agencies: FEMA, Health & Human Services and the CDC.

The Census Bureau is part of a number of different emergency management working groups organized by FEMA to coordinate the federal government’s disaster response and recovery efforts such as: economic recovery, health and social services recovery, community planning and capacity building recovery, and data analysis.

It is also part of a group of Department of Commerce agencies focused on economic recovery in Puerto Rico.

In 2017, after four hurricanes (Harvey, Irma, Nate, and Maria) and wildfires in California, the EPRT produced reports and maps covering more than 600 geographies. These are always shared with other agencies and posted for public use.

The importance of timely and accurate responses to demographic and economic surveys can’t be overstated. Without good survey response, the Census Bureau would be unable to provide valuable, timely data for use during emergencies.

“It’s a top priority for the Census Bureau to get useful demographic and economic data to emergency managers as quickly as possible so that they can make informed decisions,” Jarmin said.

The Census Bureau is prepared to respond to this hurricane season or during any other emergency that may arise. You and your family should be too.