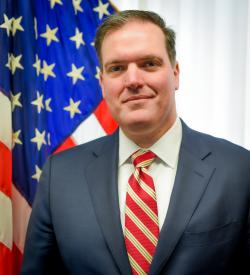 Cordell Hull serves as the Acting Undersecretary for Industry and Security.  Through his leadership of the Department of Commerce’s Bureau of Industry and Security, Mr. Hull advances the Department’s national security, foreign policy, and economic objectives by ensuring an effective export control and treaty compliance system and promoting continued U.S. strategic technology leadership.

Mr. Hull oversees an export control program regarding civilian and military dual-use technology, including the Department’s export control policy, licensing and enforcement components.  He also participates in the Committee on Foreign Investment in the United States, which reviews certain inbound foreign investments for national security risk.

Before joining the Bureau of Industry and Security, Mr. Hull served at the Department as a Deputy General Counsel and concurrently performed the duties of the Assistant Secretary for Legislative and Intergovernmental Affairs.  He also served in several senior-level positions in the U.S. House of Representatives, including as General Counsel to the Permanent Select Committee on Intelligence.  For the decade before entering government service, he practiced law in Washington, D.C.